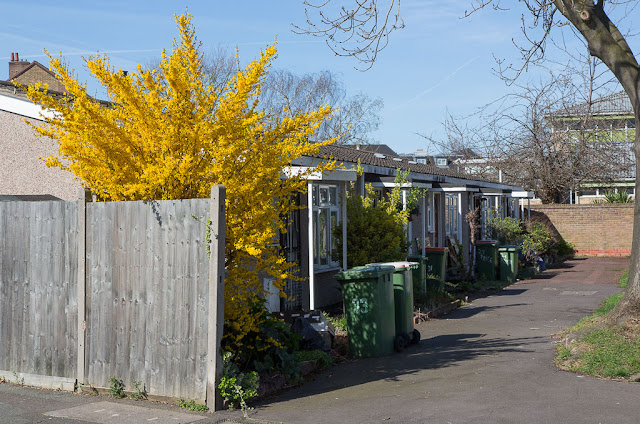 The washing machine guy came yesterday morning. He looked at our sputtering machine and tried unsuccessfully to run a few cycles. The machine started and stopped, started and stopped. "It needs a new PCB," he said confidently, adding that he would describe the situation to our management company and they may elect to simply buy a new machine. He couldn't immediately fix it but will get back in touch when a decision has been made.

A PCB, I later found out, is a "printed circuit board." So for want of a computer part that seems to sell online for something like £50, they're going to throw away an entire washing machine?

Well, it's not my machine and not my decision. But hopefully they'll choose to have it repaired rather than scrapped.

Meanwhile, I'll be hauling our laundry up to the laundromat, I suppose.

The good news is, I was able to productively use the time I spent waiting for the repairman by doing our income taxes! Woo hoo! So they're out of the way for another year. Being American, we have to file with Uncle Sam even though we don't live in the states and we pay taxes here in the UK. We don't have to pay Uncle Sam -- he just wants to know what's going on. So every year we send him a report.

It always feels great to have that done. I feel 30 pounds lighter.

(Photo: Forsythia in East London on Sunday.)
Posted by Steve Reed at 6:21 AM

Another casualty of planned obsolescence...and my stuff is almost ready for the tax preparer, so I feel somewhat productive...Good luck with the machine and your adventures at the laundromat.

Being so punctilious and open about his own tax affairs, the 45th president is planning to plug the overseas tax loophole so you and Dave had better start saving. After all, somebody's got to pay for The Great Wall.

I love that fact that you are so conscientious about recycling and reusing, etc. So many people are not; the things thrown out here not even because they are broken but simply b/c they're out of style is sad.

Taxes are the bane of my existence. (Not to be overly dramatic.) Which is why I finally today am gathering all my materials to take to my accountant...

I hope you do not have to wait long for a decision on the washer and that it can be repaired rather than tossed.
Our local vacuum repair shop is closing due to lack of sales and repair. Now days people shop online or the big box stores. If the machine breaks after a few years it is thrown out and a new one bought. So, another good small business done in.

Everything is making me feel completely and utterly in despair this morning. Thinking about all of the perfectly good appliances we throw out due to our bizarre culture is only adding to that. May whatever decision to be made about your machine happen quickly.

I hope they decide soon what to do about the washing machine. It's a bit of hassle to go to the laundromat all the time. You just reminded me that I haven't finished my taxes yet. Yikes, I had better get busy on that.

So now you have reminded me - successfully - that we need to do our tax return. When I say we, I mean, I as my man suddenly loses even the power to read when he as much as sees a tax form, printed or online.

Lucky you to have a launderette near by. Should our washing machine ever pack it in, we'll be living in unwashed hell until a miracle occurs.

Filling out the income tax is a pain. They don't know how to make things clear so that the average guy knows what they're talking about.

Oof - that reminds me that we have one more tax return to do - for our Xenia city taxes. Mike keeps saying we've done it, but I need to see proof before I'll believe him. Ha!

Taking laundry to the laundromat is such a hassle. On the other hand, the times I've had to do it, it seems to make me slow down for a couple of hours. There's nothing else to do but be slowed down. Hope you are back to home washing soon, though.

Good for you for getting your tax returns done!

we just had our nearly 40 year old washer repaired. It cost about $174 for the repair and we debated just buying a new one but the repairman said that new washers are designed and built to last only about 8 years now no matter how much you spend on one, that they all have these circuit boards now. he said if he was going to buy a new washer he'd buy the cheapest one he could get from certain brands and make sure it had an agitator if it was a top loader, that the ones without agitators did a crappy job of cleaning your clothes.