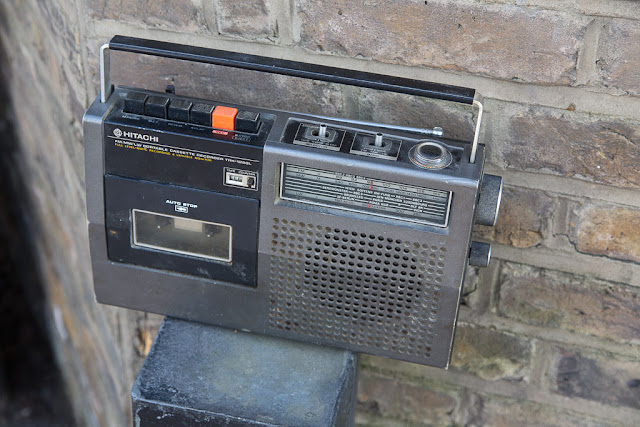 Is it terrible that I am LOVING having the house to myself while Dave is in Belgium?! Just me and Olga, hanging out, watching what we want on TV -- or maybe I read and don't watch anything at all. The heater set where I want it. Lots of space in the bed. Soup and peanut butter for dinner. Woo hoo!

The God's honest truth is that Dave is such a homebody I very rarely have any extended time to myself at home. I'm sure it will get old by the time he gets back tomorrow, but I'm digging it at the moment.

Above is another of my street finds -- I left this item behind, though. How long has it been since you've seen a portable short-wave radio and cassette player?! It looks like something I would have had in my Peace Corps years, a quarter of a century ago. It's probably about that old. 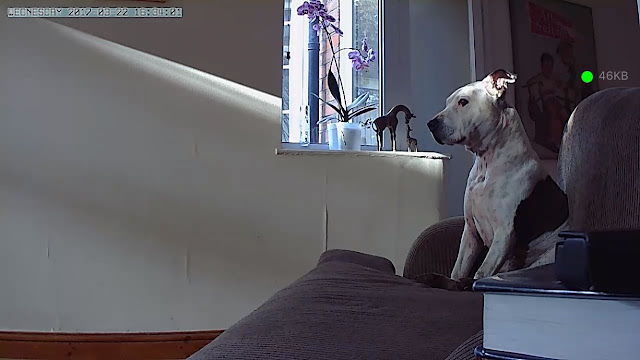 And here's an especially noble-looking photo of Olga, captured late one afternoon with the Olga cam.

I finished "The Man in the High Castle" -- the book -- yesterday. Actually, I finished it Thursday night, but I was so tired that I had to reread the last chapter yesterday morning on my way to work, just to clarify what happened in my mind. And even now I'm not sure I understand it. It's a very bizarre book, but it was interesting to see how it differs from the TV show. The whole Obergruppenführer John Smith and family storyline, for example, isn't in the book at all. It's mostly a mystical exploration of the I Ching.

I also finished my latest podcast, "Missing Richard Simmons," about the disappearance of the normally not-publicity-shy Richard Simmons from the public eye a couple of years ago. Where did he go? That's the question at the heart of the podcast, which was very well put together but ultimately reaches a rather anticlimactic conclusion. Life is like that sometimes, I suppose.

Last night I watched "Saturday Night Fever," which I haven't seen in decades. While recently transcribing my old journals I came across a mention of it from when I first watched it, in July 1997: "I was actually shocked at how good it was! Of course, everything depends on your expectations -- I expected a really schlocky, terrible movie. But it was pretty good, with the exception of the clothes and dancing, which were hilarious. They both made and condemned the movie!" Now, having seen it again, I would say the clothes and dancing are the real reason to watch. But be prepared to cringe.
Posted by Steve Reed at 7:14 AM

There's nothing wrong with loving alone time!
(And if there is, I am truly horrible.)
How nice of the Olga cam to catch her with the orchid in the background.

Oh my gosh, I haven't seen that movie in many years but, I can picture those clothes in my mind. I've been seeing some 'bell-bottom' pants in stores lately and they make me cringe just looking at them.

The podcast ended as it should have. Disappointing but real, like time for solitude after having given whole heartedly for so many years...g'night Richard. I am sure Olga is glad that you stayed home as well!

I love alone time! I don't think there's anything wrong with that at all.

Even your Olga cam takes better pictures than I do! Heh

Saturday Night Fever is one of those extreme cultural things that are the pinnacle of perfection for their spot in history, but seem so bizarre viewed from any point afterward!

I also like being alone in the house. The older we get the less time in the house on my own. More time to read and catch up on projects.

I used to really crave alone time in the house because Mike was almost ALWAYS there when I was, but now that I work from home that seems so solitary that I seek Mike out when I clock out. As I recall, after about four hours alone I used to get bored with my own company. Ha!

I understand alone time and like it myself. Great photo of Olga. I remember seeing that film when it came out in the seventies. How time flies...

Marc was gone for a week the end of February and I did not miss him one bit. it's the same here. I hardly ever get the house to myself for extended periods.