A Potpourri of Mostly Insignificant Things 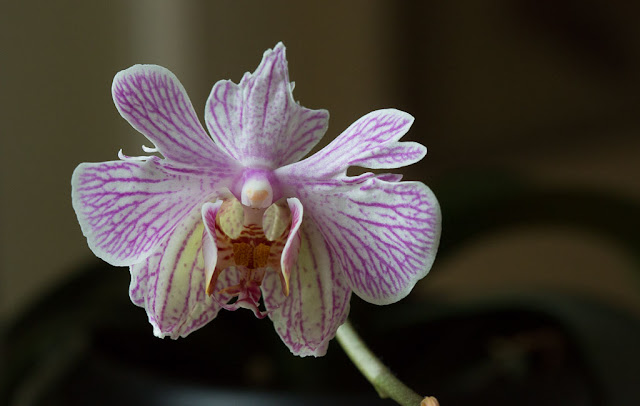 -- First, one significant thing: We now know the identity of the man behind the events on Westminster Bridge. We don't know much more than his name, but it's interesting that he's British born, thus laying to rest once again the myth of the murderous immigrant. From what I've read he sounds like a common criminal.

-- Remember the abandoned orchid that I rescued from Dave's office? (Actually, I'm not sure I ever wrote about it, so maybe not.) It had been left on a windowsill and was looking sad and withered when I brought it home last fall and rejuvenated it. Well, it has rewarded us with a blossom, albeit a slightly disfigured one. I'm not sure what happened to it but obviously the bud got injured somehow. We weren't even sure what color it would be!

-- Had some excitement yesterday morning. I was walking Olga when I found someone's wallet beneath a park bench on Sumatra Road. I looked inside and there was a tube fare card, a driver's license and a bank card. The license had a name and address on it, up in Willesden Green, just a few tube stops away. So I left for work a bit early and took the guy's wallet to his house. A woman there -- his wife? mother? -- was happy to get it back!

-- All the shed stuff is gone. Piece by piece I managed to dispose of it, as planned. 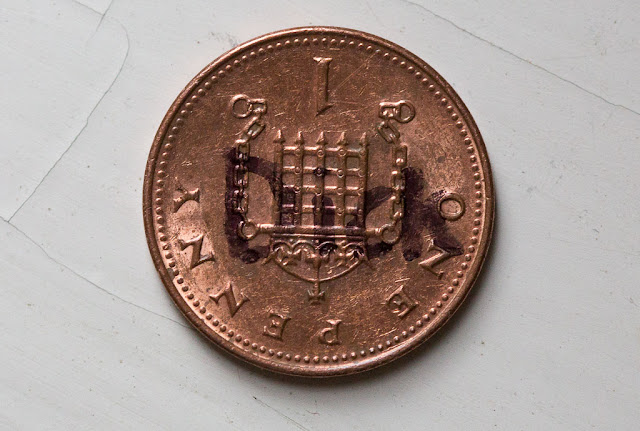 -- I found this in the school library a few days ago. Why?? Because, well, middle-school boys.

-- Our amaryllis (amaryllises? amarylli?) are way, way behind this year. Last year at this time they had long stalks and leaves. This year, only two of them have shown any sign of life so far, and they're just green nubs barely emerging from the bulbs. I think it's because they wintered in the dining room, which is cooler than the living room, where they used to be.

-- Remember when I attended London's March for Women back in January? I came across an online photo taken by another photographer that includes me! I'm about a third of the way from the right margin of the picture, wearing a green jacket and darker green hat. I was holding my camera above the crowd to try to get a wide shot, which is why my arms are up over my head. Funny!

-- I did wind up speaking some French in Luxembourg, mainly in the cafe where we had lunch. And I did OK, but I hit a wall pretty quickly. My brain just doesn't work fast enough for me to carry on much of a conversation. Still, I don't miss my French classes. I think this is as good as it's going to get.

-- The rest of this week is going to be quiet time chez nous. Dave left yesterday morning for Belgium and Luxembourg with his students, and he won't be back until Sunday. I'm trying to use the time to catch up on reading and other projects. Last night, for example, I finished my audio recording of the Arabian Nights for the 6th graders. It's nice to have that done!
Posted by Steve Reed at 6:01 AM

I bet it felt so good to get that wallet back to its owner! Good for you!

I've lost my wallet/purse several times in my life and never had the good fortune of having it returned. and how cool to find yourself in another photographer's picture.

Love that picture of you in action! And I love that you rescue plants. My dad's wife Amy was like that - their house was a plant nursery - especially in winter when things had to be brought indoors.

Your orchid blossom may look a bit unusual but I think it is prettier for it. You are so good to rescue plants.

Cool photo of you! I've had no internet for the last few hours and after being on the phone trying to sort things, my phone battery died, and needed to be re-charged so I've seen nothing more about the attack. You are a rare soul to return that wallet. The world needs more like you.

I got an orchid for a gift two years ago and it stayed beautiful with it's pink blooms for a very long time. When the blooms finally fell off, I read what I should do and followed those instructions but alas, it never bloomed again. I simply am not blessed with the "green thumb" gene. I see you in that photo. How fun to find a photo from that event that you are in.

Having recently been on the receiving end of the wallet-returning, I can tell you how overwhelmed with relief I was. I imagine that fellow was as well. Thank goodness for honest, caring people.

Most of life is made up of insignificant things! Just my opinion!