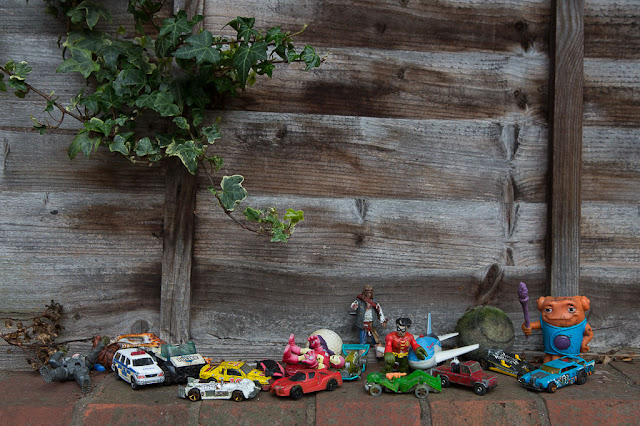 When I walked Olga yesterday morning we came across this pile of small toys, sitting on someone's garden wall. They were all quite dirty, as if they'd just been dug out of a garden. Which I'm betting is what happened. Some kid probably moved and left them behind, and the new resident of that flat found them and put them out for others to take. 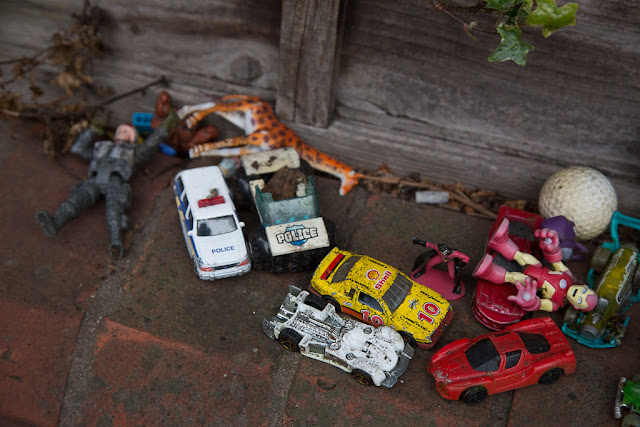 I didn't take any, though I was tempted by that giraffe. 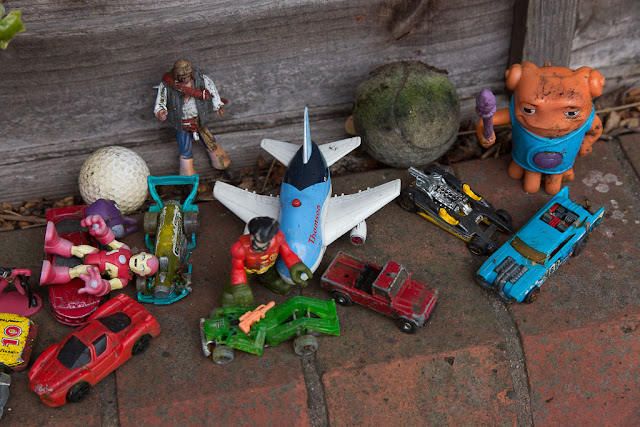 I got the weirdest stack of mail on Tuesday -- about six identical envelopes from the investment company holding my 401K. They turned out to be proxy ballots for selecting the board of directors and making changes to some of the funds. Why I got six envelopes I'm not sure -- one for each fund, maybe? I tried to skim the documents but I couldn't make heads or tails of them, so I went online and voted the board recommendations. At the end of the day I have to hope these people know what they're doing, and aren't leading me down the Lehman Brothers path.

Speaking of voting, I'm glad to see the Dutch didn't go for their far-right candidate in their elections yesterday, though his party did apparently gain some seats in government. And the Scots, meanwhile, want another independence referendum. They don't want to be dragged along into Brexit, and I don't blame them.

It's funny -- when the first Scottish independence referendum was held, I was so happy when they stayed. Now I hope they vote to go, just to give the finger to this agonizing, unnecessary Brexit process. That comes from my own anger about Brexit, though -- deep down, I'm still not sure independence is economically the best thing for Scotland.

Meanwhile, Trump has been thwarted again by the courts for his racist travel ban. Good!
Posted by Steve Reed at 7:00 AM

Too bad about those toys, they could be cleaned up...some kid's probably wondering where they are. As for the individual in the swamp, I'm always glad to see pushback.

You've got 401,000? Hell. I'm going to be really nice to you from now on... This is a truly great blog Steve. No wonder you were The Laughing Horse Blogger of the Year. Oh, by the way, our bank account has been entirely drained by fraudsters. I haven't even got enough money to visit the supermarket. Could you possibly make a generous donation? Shall we say 20k for starters?

Now the photo of the toys could be the basis for a writing exercise. I used to use photo for middle school writing. I'd have a dozen photos and the kids could pick their topics. I wish kids could get more time for story writing.

Those toys are beautiful and heartbreaking, too. I've found little toys in this yard and I always keep them.
I am not going to talk about politics today. It's too pretty.

I was happy with the Dutch election results too. However in the days leading up to the election, I was getting so discouraged by all this populist talk everywhere in the world. What is that saying...If we don't learn from history we are doomed to repeat it? Well, we seem to be being led by some pretty uneducated people these days. In fact, the far right seems to relish the fact. When they refer to "elitists", they are referring to scholars and the highly educated.

Kids' toys are so colourful - they made a great shot for you, dirty or not.

Have you come across the FB giraffe cam for April the giraffe in the U.S. (Animal Adventure Park) who is expecting a calf any day now? In case you're interested in giraffes. The first day I found it I spent over an hour just watching her chew, stand up, chew, lie down, chew, walk around, repeat, repeat. But when she has that calf, things are going to start hopping!! I hope.

That's a lot of buried toy treasure - I'm sure there is a story around those toys.

I'm surprised you didn't take at least ONE of the toys. as for Trump, travel ban failed again so in retaliation he wants to cut the Meals on Wheels program for the poor elderly because it isn't 'successful'.