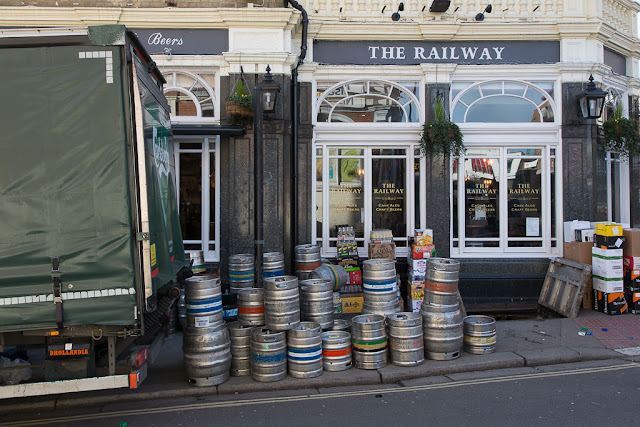 It's foggy out this morning -- the back of the garden is shrouded in white so I can't tell whether the marauding foxes visited our new plants again. Yesterday morning we found one dug up for the second time. We put it back in the ground, but surely every time it's unearthed its chances for survival grow slimmer.

There's lots of yellow out there now -- the daffodils, the mimosa/acacia tree that I walk past every day, and now the forsythia by our bedroom window too. And trees like the ones I posted Monday, like big pink clouds.

Dave and I finished the second season of "The Man in the High Castle." I've decided to read the book, by Philip K. Dick. I'm curious to see how much of the TV show is in the original work. It's a pretty complex show and the book is slim enough to be called a novella, so I'm thinking the TV folks have beefed it up. Which is fine -- I just want to compare.

Speaking of books, we're weeding the biography section in the library. We have a parent volunteer who was a librarian in a past life, and she's doing it for us -- she's been making good choices so far, though we have final approval. Jennifer Love Hewitt? Out! A gigantic, tiny-type, read-only-once, 40-year-old biography of Cromwell by Antonia Fraser? Out! Clark Gable? Out!

We have a lot of old biographies, especially of Hollywood types, that I think were probably donations at some point. The fact is, students are not likely to ever use them for research -- especially now that we have the Internet. And kids just aren't going to read huge tomes like Ms. Fraser's, as authoritative as she is. (I did save her book on Henry VIII's wives, and of course we have her classic "Mary, Queen of Scots" around somewhere.)

In photo news, Lonely Planet used a couple of my pictures in a feature about buildings that look like faces. (For free, natch, but I did give permission.) I also allowed a health-care authority in South London to use one of my pictures on their web site (which isn't live yet). I gave it to them for free, but they've now offered to give me a £25 restaurant voucher, so that's a nice little unexpected reward.

(Photo: Restocking a pub in West Hampstead, a few days ago.)
Posted by Steve Reed at 6:33 AM

How nice that you have an actual librarian volunteering her time...Sounds like she's doing well with the weeding. She may be able to give you some tips on book recommendations and collection development. Sorry about your plants and the foxes.

Congratulations on your Lonely Planet pictures!

I hope the lady volunteer doesn't come across "REED AMONG THE BULLRUSHES", the unauthorised biography of Steven Reed. It contains several raunchy passages that would make her blush with disapproval or embarrassment. There's also the chapter where Reed madly assaults and badly injures a bunch of eighth graders who have been rearranging the library shelves just for mischief. This is not what baseball bats are for.

It's so cool to be published, Steve! Proud of you!

how nice that your photography is getting notice. not getting paid but hopefully they credit you.

I watched both seasons of The Man in The High Castle, but I had a lot of issues with it; i can't go into them without giving spoilers for those who haven't yet watched, but i did wonder if the whole enterprise was in part designed to numb us to the proliferation of the swastika, and did you notice all the aryan supremacy folk had the best "things"? And consider who dies along the way. I would so love to sit down and have a discussion with you about the whole thing, including the holes in the plot, and the almost total absence of people of color, not counting the Japanese. I'd love to know how the series landed for you, and how much of the ickiness i felt was informed by the shoes in which i stand.

It sounds like London is a colorful place right now. I agree with you about the samurai costumes. There is a lot of similarities with the Star Wars costumes.

How nice to be appreciated far and wide! The Lonely Planet article was fun - especially the chicken church in Florida. Did nobody notice that in the drawings, I wonder? But if they had, we wouldn't have that perfect chicken :)

I find it hard to weed out books. On the other hand when our librarian weeded out books, I came home with books!

a few years ago , our weather and London's weather were twins. Our weather has slipped this year into some messy, howling, dark, freezing, horror. London continues to improve. I take this as an omen.

We even have fog here in southern California i the early morning! It seems a bit early for June gloom, but that's what's going on I guess in this climate change era.

I have Antonia Fraser's 'Mary Queen of Scots" around somewhere too.