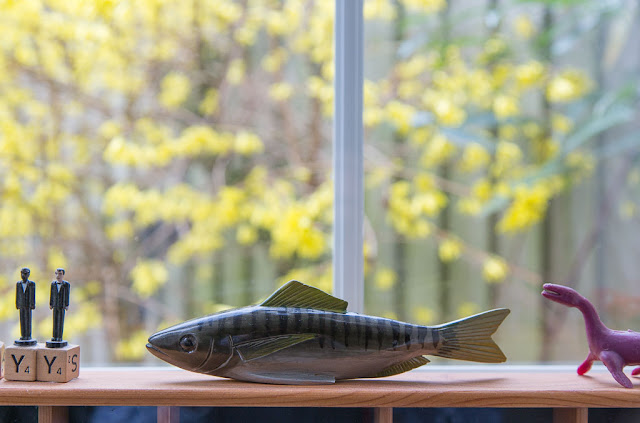 After my dad died last summer, I retrieved a couple of small mementos from his house.

One was the carved wooden fish above. I bought this fish in Ghana, when I was traveling there in 1994. I was in a little town called Winneba, on the palm-fringed coast, and I'd come down with a fever that eventually got dramatic enough to make me go to a doctor. Here's my journal entry from Oct. 21, 1994, which tells the story of the fish:

Just stayed in bed all afternoon. I’ve started a cheesy Clive Cussler book, which was keeping me pretty well entertained. And I had a visitor – a local boy named Daniel who is totally nice! I am a sucker for this kid – I don’t know why. He introduced himself yesterday and then showed up today with two little carvings to sell – a frog and a fish. I, being a sucker, bought the fish for 1,000 cedis ($1). I figured Daniel needs the money a lot more than me, and if I don’t keep the fish I’m sure I can give it to someone. We also exchanged addresses – I gave him my DeSoto address because I am suspicious of this whole address exchange thing that kids here do – I mean, WHY? Do they sell them or something? But I will send Daniel a postcard.


As it turned out, I did send him a postcard, and he sent me one back, if I recall correctly. But we didn't stay in touch beyond that. I gave the fish to Dad that Christmas, and he kept it on a shelf above the television in the living room for 22 years.

I wish I'd bought Daniel's frog, too! 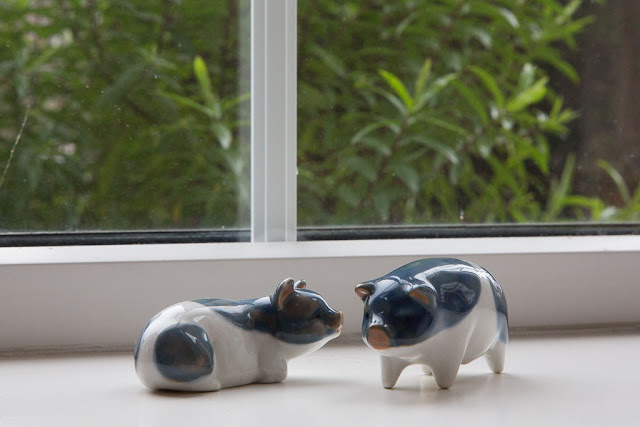 My dad used to "collect" pigs. Or, more accurately, a collection of pigs was foisted onto him by other people. I don't remember how it started -- I think Dad told someone that he liked pigs, and they gave him a figurine of a pig, and pretty soon we all were giving him pigs. (Dads are hard to buy gifts for, so when a "hobby" like this arises, everyone latches onto it.)

As I recall, my stepbrother and I gave these two pigs to Dad when we were about 12. I bought one and my stepbrother bought the other. We got them at a now-defunct gift and housewares shop at University Square Mall in Tampa, next to what used to be Robinson's department store. I don't remember the occasion -- a birthday? Father's Day?

A few years ago, Dad cleaned out the pig collection. He had about 100 of them, I think, and he donated many to Goodwill. He'd set one of the pigs above aside to keep, and was going to give the other away. I told him he had to keep them together -- they're a set, after all!

When he died, with my stepmother's blessing, I tucked these little pigs into my suitcase. They now sit on our dining room windowsill, basking in the sun.

I have a few other items that belonged to my dad, most notably Blackie. But the fish and the pigs seem to represent the intersection of our two lives -- they were his, but they were also part mine. I think of him every time I see them.
Posted by Steve Reed at 6:38 AM

There's a quiet intensity to this post -- and I love it. Thank you.

I agree with Elizabeth and also think that this post and those objects you chose as gifts or mementos for and from your father since his passing are a wonderful tribute to your time with each other.

Being a Pisces I love anything fishy and your fish is beautiful.
Like your Dad I collected pigs at one time but also like you say I had so may foisted upon me and some pretty dire that I stopped collecting and gave the lot to charity. lol

...And I suspect that your father thought about you and your stepbrother every time he saw those two hogs. You were most probably the one lying down staring out of the window like a librarian.

Sometimes little objects can hold entire universes of memories within them.

These two gifts must have been special to you as you remember them.

my dad collected eagles. I took one or two. I thought two but sitting here I can only mentally place one so I don't know what happened to the other one I thought I kept.

That fish looks quite beautiful. It's funny how little mementos come to mean so much to us. I have several things from my parents that mean a great deal to me. And, I wear my mother's high school class ring every day. I have my own class ring that I never wear but mother's is on my finger every day.

Am loving the dinosaur

Some mementos are valuable beyond their actual worth, eh?

And this time, the FROG was 'the one that got away'! heh

My mother collected pigs too. I think I might have one or two, but really since my dad still lives in their house most of her stuff was still there. Well, until now - his new fiancé is getting rid of a lot of things. I don't blame her - she shouldn't have to live with my mother's stuff. So I brought some more things to the new house. Poignant reminders...