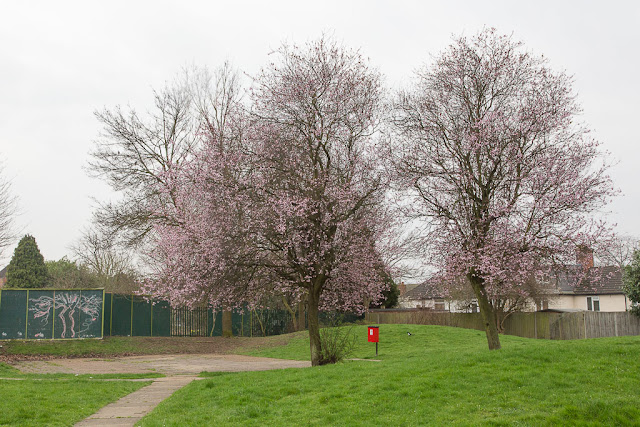 Olga took me on a long, mysterious walk yesterday morning. She followed her inner compass, or scents on the wind or voices in her head or something, to an area near Child's Hill where we haven't been before. I just let her lead the way, and darned if she didn't find a park!

Because I'd been negligent and left the Kong at home, she monopolized another dog owner's game of tennis-ball-fetch with his labrador, Spidey. (The guy was very nice about it, and fortunately had multiple tennis balls with him.)

And we saw all sorts of signs of spring, like pink trees (above)... 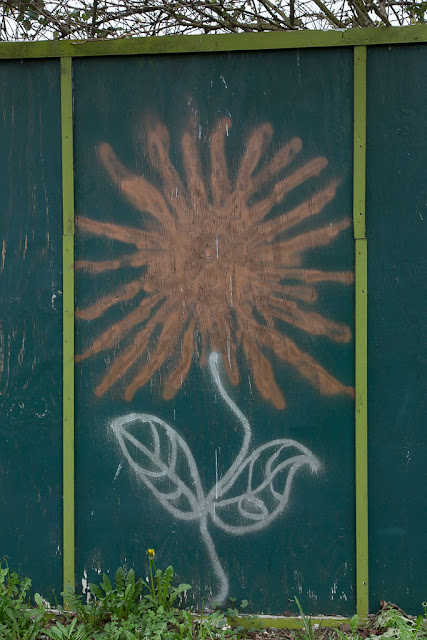 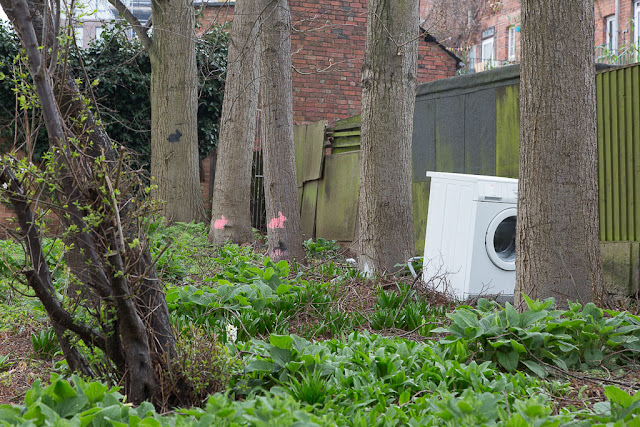 I had a busy weekend, doing some spring cleaning. On Saturday I cleaned out and organized our garden shed, and threw away a big bag of stuff. (Nothing chemically dangerous -- I got rid of all that a few summers ago!) We have some awkward items like broken long-handled tools that won't fit in the trash bins, and I haven't yet figured out what to do with those.

I also found a huge bag of peanuts we bought for the squirrels and birds. The peanuts look OK -- maybe a little buggy, but probably still suitable for wildlife consumption.

Then I purged our kitchen pantry drawer, where I found two bags of flour that expired in 2010! We moved to England in 2011, and we didn't haul any expired flour across the ocean, so this is a bit of a mystery. I think they were given to us years ago by the parent of one of Dave's students when she cleaned out her pantry in preparation for returning to the U.S. They must have already been expired at that point. Anyway, they went in the trash, along with a rusty can of condensed milk that I know we've had at least five years. I'm not a strict adherent to expiration dates, but 2010 is beyond the pale.

The foxes left our garden alone last night. Maybe after all that digging they realized there are no bones there. Or maybe having Olga streak into the darkness after them gave them a fright!
Posted by Steve Reed at 6:42 AM