Billy Fury and Other News 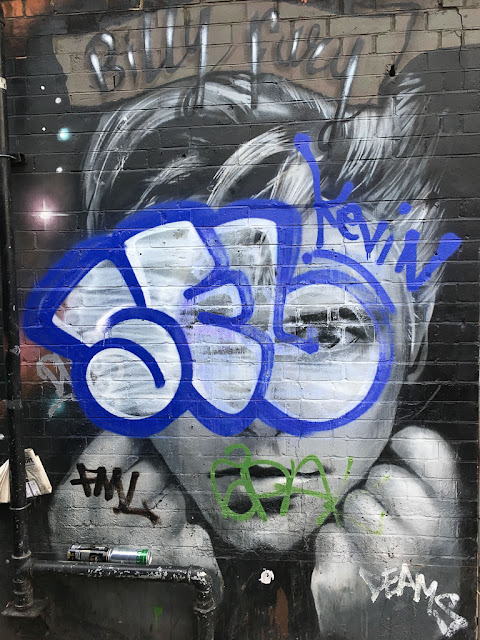 -- Our local mural of Billy Fury got slammed with an ugly tag last week. (A couple of them, actually. The green one showed up after the blue and white one.) It looks like someone's already tried to clean it off, because at first we couldn't see his eye through the white paint. Hopefully the mural can be restored. It was successfully repaired after the golden eyes incident, but that was minor compared to this. I don't understand the wanton destruction, but for some graffiti writers, destruction is the name of the game.

-- Many questions were raised about whether the tree I posted yesterday is a mimosa (as I'd claimed) or an acacia. Turns out the question is one of nomenclature. It's a different species from the tree with pink flowers known as a mimosa in the United States, which admittedly was probably the type I dug up from my grandmother's yard. And it is a type of acacia -- Acacia dealbata, I think. But here, at least, that tree is commonly called a golden mimosa. We're all correct!

-- Yesterday an 8th grader asked me for a book recommendation. I gave him "Slaughterhouse Five." And then I spent all night worrying that it's too mature and complex for him. Which is probably true. I may try to suggest something else when I see him today. The risks and hazards of librarianship! 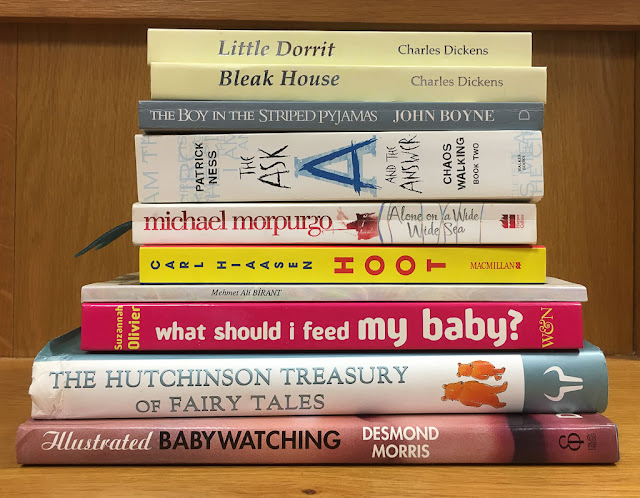 -- While walking Olga in the misty dampness of yesterday morning, I found these books stacked in a trash dumpster. Some of them were brand new and apparently unread! Initially I left them there, not wanting to lug them along while walking the dog. But when I walked to work about half an hour later I brought a plastic bag, collected them and took them with me. At lunchtime, I took them to the Oxfam charity bookshop. I do not understand why people throw things like this in the trash. As we have established, waste makes me crazy. 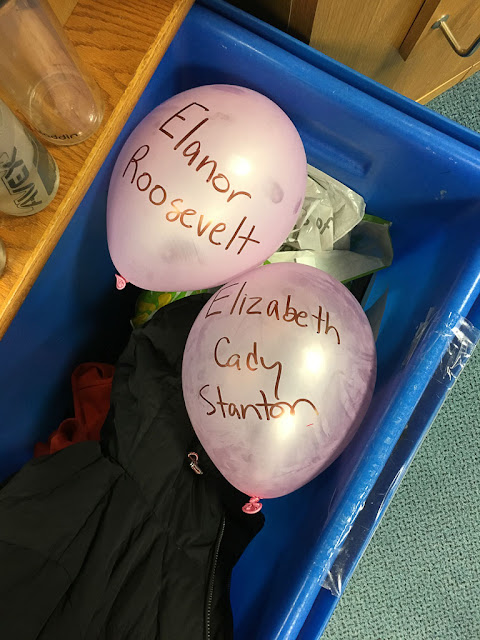 -- Yesterday, for International Women's Day, students put up a display featuring balloons bearing the names of historically significant women. These two balloons somehow wound up in the library lost-and-found bin. I took them back to the display, after subtly correcting the grievous misspelling of Eleanor Roosevelt's name!
Posted by Steve Reed at 6:44 AM

What the hell is a "dumpster"? Did you mean "skip"? I hope you don't fall in to one when rooting around for stuff. You might get taken away to a landfill site but at least you would then avoid the complaints of that eight grader's parents. "Slaughterhouse Five! It's subversive! Almost pornographic! We demand a grovelling apology!"

Hmmm...
You might be right about Slaughter House Five but then again, if the kid is mature enough, it'll be fine.

some people are just too lazy and can't be bothered. I don't understand it either. books could be donated to so many places.

I can't imagine tossing books into the trash when there are so many place to you can take them. That really is sad about the mural. Usually, taggers leave murals alone but it sounds like someone has a problem with this one for some reason. Either that or it's just stupid vandalism.

We'e a throw away society. Products are purposely made to last a short time. Like my micro wave that didn't make it to two years when it died.

FWIW and IMHO, :), I think Slaughterhouse Five is an excellent choice. Eighth grade would be about 14 years old or so and that book is very appropriate for that age. I have to admit I was about 6 years older than that when I first encountered any Vonnegut books. I remember laughing so much at Breakfast of Champions. I was enamored by Mr. Vonnegut's irreverence. That was many years ago for I am an old man now. Ten years ago while dating my husband in Macedonia I took a large handful of Vonnegut's work over there with me. As I read them again I saw that man as I hadn't seen him the first time around. I believe epiphany would be an appropriate word to use. It was a profound epiphany. After that eighth grade student has read that book ask him about it. See if he found any pain in those words.
I really enjoy your blog, thanks for sharing with us.

You did good, Steve! This is how to live our lives up close - the everyday things that help others, help the planet, set a good example.

Just before we moved Mike lugged SO MANY books to a bin for a company that repurposes books (tries to find the right home for them, and then if they're just not reusable, recycles them). It was hard work, but considering how much of our stuff ended up in the trash just because we couldn't recycle everything, it made us feel a little bit better. Moving is brutal to the environment!

I had a very close friendship with Billy when I was 13/14. He was appearing in Gt Yarmouth, and staying in a caravan (no big star treatment)then. What is making me so pissed off about all theses historical child abuse cases, is that we were not all (if any) forced or raped. We were thrilled to be in the company of our idols I was with him for the entire summer and he was kind and gentle, and all I have left are wonderful memories of him. It makes me sick to hear elderly women like me, now accusing these pop stars of coercion or worse. They had no need, Girls were throwing themselves at them. I treasure my memories. He was a gentle soul, and in no way did he take advantage of me Sorry for the rant, but not all celebrities were like Jimmy Saville. Most were just young men having a good time.

Ms Moon: I think he'll either not understand it, or he'll like it. Either way, no harm done.

Sharon: I think it's just vandalism. Ten to one the guys who tagged it have no idea who Billy Fury was.

Red: Yeah, the wastefulness of electronics is especially terrible. So many pollutants in those products.

TJ: Well, thanks! I'm glad you're on board with my recommendation! I read "Slaughterhouse Five" as a teen and loved it, but on reflection I think I was a few years older than this kid. He took another book yesterday -- "Catcher in the Rye." We're courting controversy! :)

Jenny-O: I do believe in the power of the little things.

Bug: Moving is brutal in some ways -- as is renovation. But it's also a necessity in the modern world to purge stuff. We can't keep everything! Good on you for passing along those books so that they (hopefully) will be reused.

Lesley: What an interesting story! I hadn't heard any allegations of abuse directed at Billy Fury. Have there been some? Jimmy Saville is a different animal altogether.