A Stack of Postcards 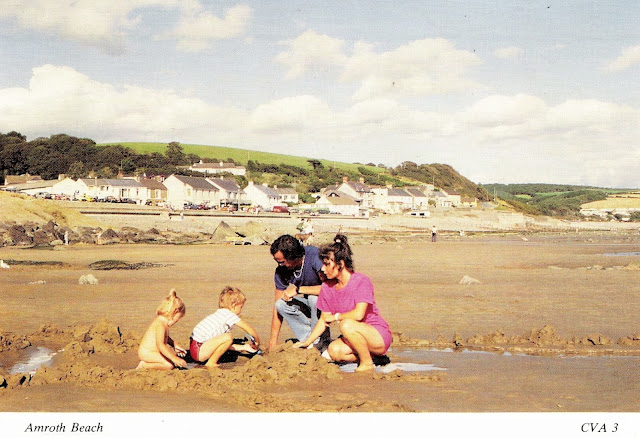 Yesterday I was walking home from work, in the rain, when I came upon a torn-open trash bag of clothes and shoes on the sidewalk. My arms were full of groceries, so I didn't attempt to save the clothing (as I have done in the past). But I did grab a stack of somewhat soggy discarded postcards.

This find came at a fortuitous moment, because I've been so busy recently -- and the daylight has been so short -- that I've pretty much run out of pictures of my own to blog. I needed something to post today. Et voila!

I brought the postcards home and sorted through them. Most were junk but these few seemed worth saving.

First, a lovely nuclear-family vacation on Amroth Beach, in southwest Wales. (None of these cards have been mailed, and none are dated, by the way.) 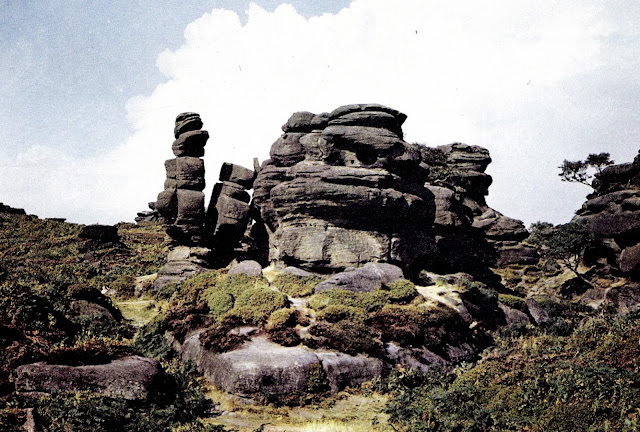 This is Brimham Rocks, near Ripley in Yorkshire: "A scarp 'edge' of Millstone Grit sandstones, eroded and fretted by the elements into rocky crags of castellated appearance. Differential weathering of the sandstones has accentuated original bedding and current-bedding directions."

(The card was published for the Geological Museum in London. Those geologists take the fun out of everything!) 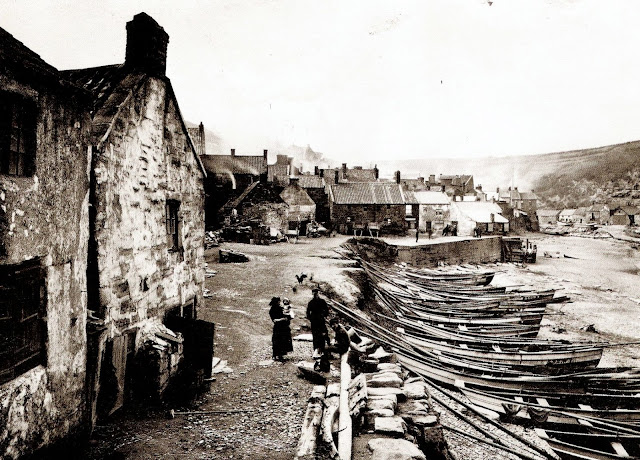 This is Staithes, in North Yorkshire, around 1875. "A North Yorkshire coastal village steeped in history and legend. The Cod and Lobster Inn around which figures are grouped in the distance has been washed into the sea on four occasions, the last time being in 1953."

I think the Cod and Lobster Inn is that little white building out on the point to the right. I can see how it would be vulnerable! Wonder if the owners can get insurance? 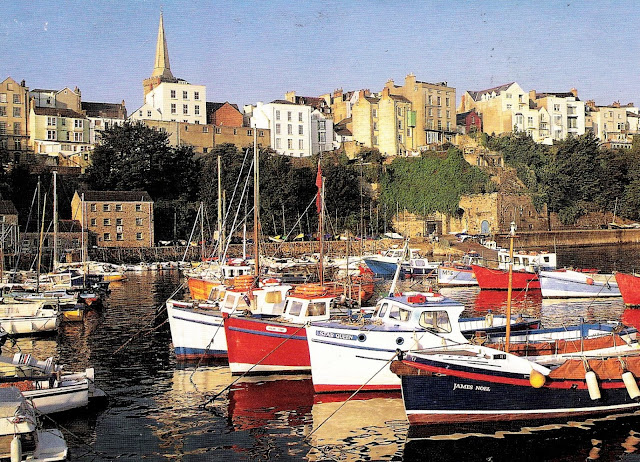 This is the town of Tenby, also in southwest Wales. For some reason, lots of the cards depicted Tenby and its environs. Maybe whoever threw them out was from there, and kept a stack of postcards to remind them of home during their long dreary workdays in London. And now they're moving back to Tenby and they don't need the postcards anymore. Let's go with that!
Posted by Steve Reed at 8:27 AM

I have visited "The Cod and Lobster" in Staithes. It is indeed that white building. However, Staithes is no longer as exposed to the sea as it once was because a stone breakwater has been built across the bay. I love old postcards - especially when there's writing on the reverse. Little windows into a world that has gone.

YP has taken the wind out of my sails re the Cod and Lobster. I was GOING to say that with global warming and the rise in sea level the owners will *never* get insurance!

There, I've said it anyway. Raspberry to Mr. Pudding :)

another great find as Steve rummages through another trash bag.

Things like this lead to so many questions. I hope you are right as to why the postcards were in the trash. My mind would never have gone there but would have suspected that someone died or, more prosaically, that someone was just clearing out closets.

I like Ellen's image of you rummaging through another trash bag, with the neighbors explaining to one another, It's OK, he's from Florida.

I'm always impressed by the quality of your finds on the streets. We tend to drive everywhere, and the trash we see is mainly broken glass and plastic grocery bags. There are few signs of life on the road sides here.

Tenby has a very picturesque harbor so I can see why there might be a lot of post cards of it. I love seeing old post cards and these are great fun! I love that little family on the beach.

A good find, Steve. I wonder, though, if the other residents of your city comment "Oh it's just that fellow from Florida, rummaging through our trash again."

Another cool find. You make me want to go through the bags of stuff left on the streets here.

All the post cards make for a good story.

You find the most interesting stuff, and always with a good story or two thrown in...