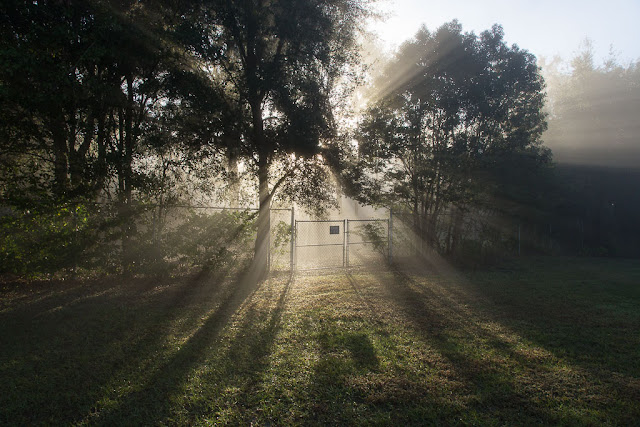 Here's another shot taken on Tuesday morning, when the mist and the sun were blending in amazing ways. Unfortunately, the weather took a turn for the worse yesterday, and now it's pouring rain. I guess it's only unfortunate in that it limits our activities -- it actually sounds really nice from indoors.

We took Maybelline on an adventure yesterday. She lives in an enclosure on my step-mother's property -- a good-sized pen, but one she never leaves. She doesn't seem to mind it and as you've seen in the videos, she has a shelter and plenty of room to run around and she's well cared for. But you can't help but feel a little bad that she never gets out.

So Dave and I put a leash on her and took her for a little walk. Maybelline did not know what to think. She kept her tail between her legs, but at the same time, she was fascinated by everything -- all the new smells and sights. My stepmother is considering bringing in a dog-walker to train Maybelline and maybe take her out and about now and then. (She's too big for my stepmother to manage alone.) I think that would be a great idea.

After lunch, Dave and I went to the nearby Violet Cury Nature Preserve, where I'd hoped to show him some gopher tortoises. But apparently I am destined only to have bad weather experiences at that park, because about ten minutes after we arrived the rain began. 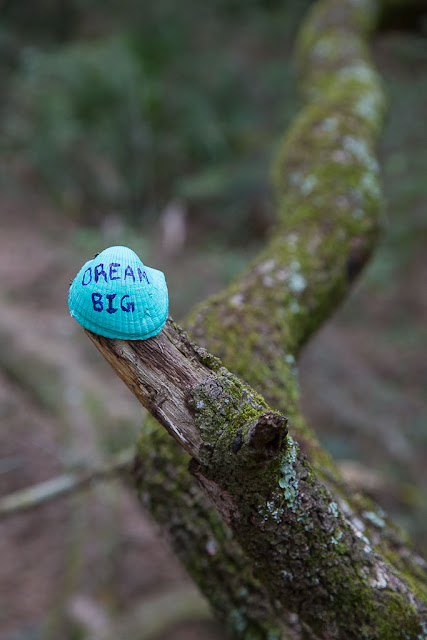 I had just enough time to find this peculiar blue shell along the trail. "You find the weirdest things," Dave said. We left it there, and turned back for the car.

We ran some errands in the afternoon, bought some last-minute Christmas gifts and went to lunch at a Chinese restaurant. Dave could not stop exclaiming about his General Tso's Chicken. There is something comforting about a basic strip-mall American Chinese restaurant -- the kind of place where you get food in a paper box and fortune cookies and orange duck sauce in little clear packets and the food marked "hot" on the menu isn't really all that hot. You know?

Dave and I played a game where you read your fortune aloud and at the end add the words "in bed." (Apparently this was a thing when he was growing up and he mocked me for not knowing about it.) His didn't work at all, but mine was something like, "Never forget what is worth remembering...in bed."

Anyway, we spent the rainy afternoon relaxing and  I finally got our charitable donations made. I sent them via Paypal directly from our bank account, thereby skirting the credit-card barrier. Voila!
Posted by Steve Reed at 11:32 AM