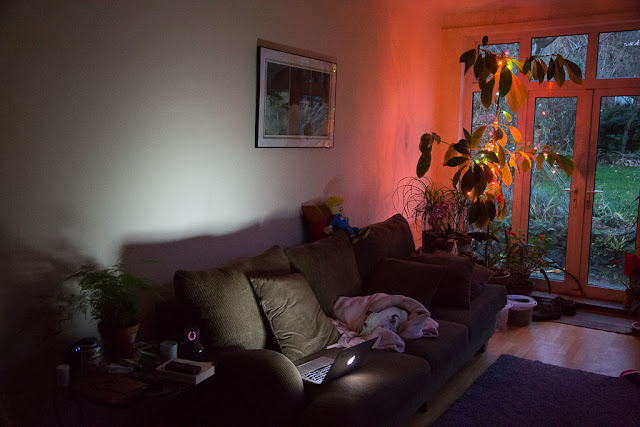 Here's our little holiday home at dawn, complete with Olga curled up in the pink blanket behind the computer. (She's probably been online again.)

Dave has finished his final band concert, so that gigantic seasonal hurdle is behind us. Suddenly it seems like it's almost Christmastime. We'll be finished with school this week, and we leave for Florida next Monday. I still need to do a few things for the holidays -- some minor Christmas shopping -- and I'm starting to think about packing and the practical stuff.

I got a call from Simone, who's going to dog-sit Olga while we're gone. She wants to take Olga for a walk on Saturday, to re-familiarize her with the routine. When she suggested it, I blurted out, "That sounds great -- then I won't have to do it!" Which is an obnoxious thing to say, but I have to admit it was my honest unfiltered response. Simone just laughed.

I think we're just going to let the houseplants fend for themselves. They should be fine. I'm pretty sure that's what we've done in the past in the winter.

On the way to work yesterday I passed the trash bag with the postcards and I saw, in daylight, that there were many more postcards still lying there. So I grabbed almost all the rest -- a fairly big stack. I took them to work, sorted them out, threw most of them away and dried the few I wanted to keep. (It's been a bit rainy recently.) Surprisingly, this did not freak out my co-workers. In fact, my boss asked me to save some for a guy she knows who regularly sends unusual postcards to his kids. Anyway, I'll probably have another blog post of random postcards to show you!
Posted by Steve Reed at 6:30 AM