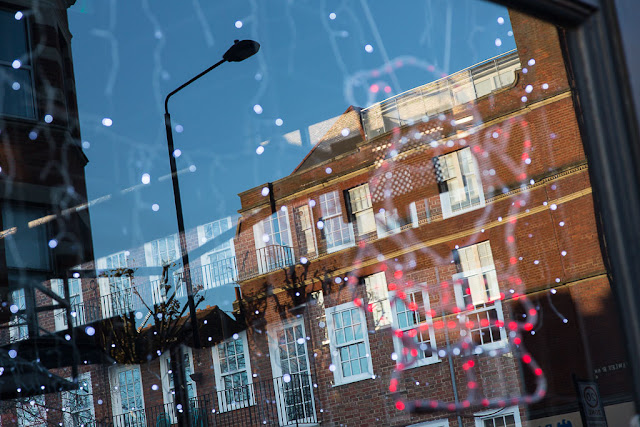 The contractor came yesterday and removed all the scaffolding from around the house -- finally. So I guess the roof is done. Honestly, it seems like they only worked on it for about three days, with long periods of quiet in between. Our upstairs neighbor, the Russian guy, crawled around on it some, scraping the eaves and doing God-knows-what. (I'm pretty sure he wasn't supposed to, but he did.) Remember how our managing agent told us in early November it would only be up for a week?

Anyway, I'm glad to have it gone -- now I can look out the windows without seeing bars and pipes. It was a little like being in Shawshank.

The best part is being able to move my cyclamens back out to the front porch. I had to bring them in to protect them from the scaffolding and roof workers, but cyclamens seem to prefer cool temperatures and they looked a bit wilty inside. I think they'll be better off outdoors.

I have been so cranky the past few days. Suddenly I'm feeling all this holiday pressure. I've bought no Christmas presents, and the library has been busier than I have ever seen it, honestly. We've had a couple of classes doing research projects every period, plus masses of middle schoolers checking out reading material for the holiday break. I've been coming home so tired that I can't imagine going to a store in the evening to buy anything for Dave or anyone else. I'm not sure what I'm going to do, aside from summoning superhuman strength and going tonight, which is kind of my plan. We'll see.

A few nights ago I made our annual donations to the ACLU, Planned Parenthood and the Southern Poverty Law Center using my credit card -- and then discovered that they'd all vanished by the next morning. I called my bank and they told me the charges never went through -- which isn't true, because I saw them as "pending" on my online statement the previous night. So I made the donations again, at the advice of the bank representative, and he watched as they appeared. Now, this morning, two of them are gone again, and I show a double donation to the SPLC. (As much as I love the SPLC I don't want to donate twice my usual amount!) I think the bank's anti-fraud machinery somehow flags the charges, which mucks everything up. This will probably take forever to sort out.

(Photo: A blurry Santa in a shop window in West Hampstead.)
Posted by Steve Reed at 7:19 AM

Easy to get cranky in the build-up to Christmas - you are not alone in that, so no shame. If only we could celebrate Christmas without the hype, commercialism and hypocrisy that usually accompany this time of the year. I get cranky too, most of all at the stupid drivers on the roads who 1) phone and/or text while driving 2) take both hands off the wheel to gesticulate 3) don't stop at the "Stop" sign, and 4) overtake me on the inside lane. And that was just today - don't start me on all the other stupidity yet to unleash itself upon us, of which drink and/or drug driving is my pet hate. Cranky - ah yes, where was I?.....

You are feeling "so Cranky"? Do you mean Jeanette (Wee Willie Cranky) or Ian Cranky? See https://en.wikipedia.org/wiki/The_Krankies
P.S. I hope you have lots of fun on your Christmas trip.

This is the reason I don't like Christmas. When the kids were all here it was different but now it just annoys me. Years ago (sorry, I'm old) Christmas consisted of just two days and then back to work, it was lovely, but now it just seems to go on forever.
I'm sure you'll feel okay once you are on your way to your holiday.
Briony
x

I'm right there with you, Steve. And the middle schoolers I work with have been INSANE this week...and so have their parents. The whole staff is counting the days until winter break.

I haven't bought anything yet, either.

Ugh. I woke up this morning officially off-the-charts anxious. And not so much about Christmas because I'm not really doing it but because I haven't gotten anyone to cover all of the house and animal sitting and because...well, I'm crazy. And I have a doctor's appointment today. (Not sick, a check-up.) So it's the trifecta for me and I understand how you feel and it's NOT FUN!
We can do this, Steve. I swear. We can.

I like knowing that you and I donate to the same places. It does worry me though that you had to do it twice. I'm getting very leery of online money transactions. Good luck with the Christmas shopping.

this is exactly why we don't do christmas. the pressure to buy all those presents is to me worse than the actual cost which we can't afford anyway. and the whole idea of required gifting just goes opposite of what gifts are about anyway.

The lead up to Christmas in schools is always a nutso time. Kids just are too excited. I found it the most stressful time of the year.

I've been so busy crocheting these danged blankets that I haven't even thought about anyone else's gifts. Although who am I kidding - I don't think about them this early anyway. Ha! I'd like to be more organized but I'm just not.

I have to admit to being greatly cheered by reading that other people are out of sorts too, like me. Thanks for sharing! :)

Good luck with your shopping. If you are headed to Oxford Street, I'll picture you fighting those crowds along the street. They are pretty thick all year so I can't imagine what they are like so close to Christmas. Yesterday I met someone for lunch and I walked right through Saks Fifth Avenue to get from the parking lot to the restaurant. The store was practically empty. Everyone in Phoenix must be shopping on line this year. Or, maybe they just aren't shopping at Saks.

Socks, the universal gift. I'm getting socks for my husband, and my husband is giving me socks. And there may be a black light flashlight for locating scorpions out in the yard at night. Woo hoo! I do hope once you're on the plane that your crankiness will subside.

The joy of Christmas giving can turn into resentment if it isn't done early enough or maybe spur of the moment. But if you see the perfect gift in, say, July and purchase it can you keep it a secret until Christmas? It's a conundrum.

At my house, we celebrate ChrisHanuKwanSolstice, when we welcome all the Winter festivals of light all at once and fill our hearts with happiness, peace, and positivity, and then we drink to make the season merry and bright.

My solution to holiday crankiness brought on by "too much left to do" is to lower my expectations of myself. There's no such thing as a perfect gift for someone so I go with "good enough", the tree is the only decoration I want, and if I have to buy pies, not make them, SO BE IT. IT JUST DOESN'T MATTER. lol

Crankiness rules in December, OK?
And yes, the cyclamen will be much happier outside in the cold.
Alpbie