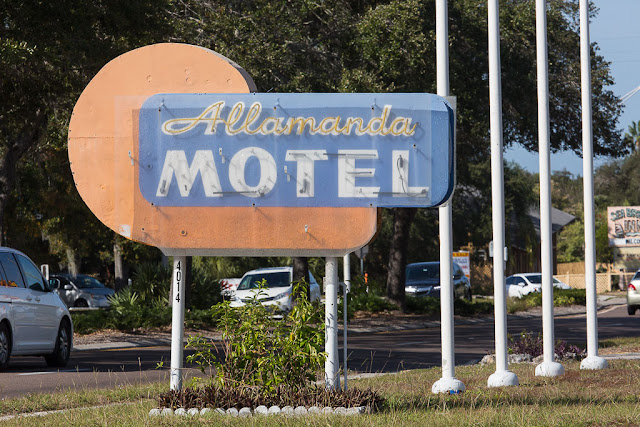 Tamiami Trail in north Sarasota -- which used to be the main north-south highway through the area before the Interstates were built -- is lined with old mid-century motels. I have long enjoyed driving this route and seeing the old signs. I got to do so again yesterday when I went to Sarasota to have lunch with two old friends, Charlie and Jay, who I used to work with when I was a reporter at the paper there. 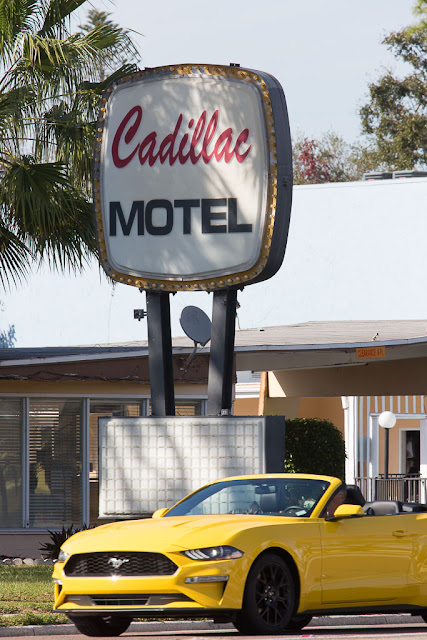 We went to a little restaurant in downtown Sarasota and, man, has that area changed. (It's been 18 years since I left Sarasota and moved to New York City.) So much construction! 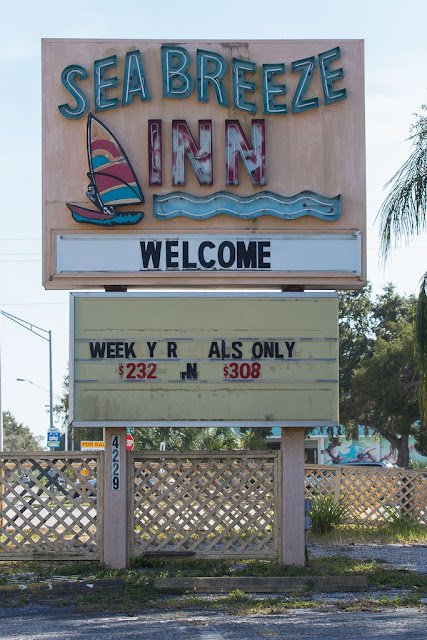 Anyway, it was good to catch up and see what the town looks like now. (Overall it's much swankier than North Tamiami Trail, which -- although lined with charming old signs -- has long been somewhat downtrodden. I think it looks better now than it did when I lived there.)

Before lunch, I spent the morning with Dave and his family. We had three more occurrences of the mysterious power outage at their house, which I think has something to do with a failing circuit breaker near the electric meter. We eventually learned to use just one major appliance at a time! 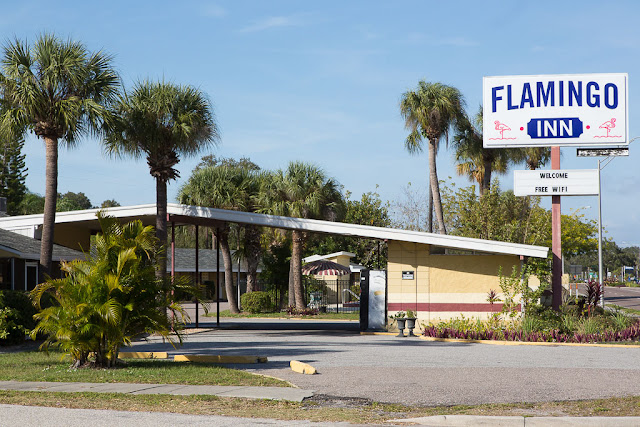 Last night we went for drinks at the Swordfish, a restaurant in Cortez, where we saw roseate spoonbills a few years ago. This year, none showed up. And then we went to the Sandbar on Anna Maria Island for dinner, and I wasn't driving so I got to have a martini. Woo hoo!

Now Dave and I are preparing to fly back to London. Our plane leaves tonight. It's been a good visit and we'll get in a bit more activity today, but I think both of us are ready to go home.
Posted by Steve Reed at 11:34 AM

Oh I love those old motel signs! Are the motels still operating? The age of independent motels seems to have almost passed away in America. It's not easy to survive when you are competing with corporate brands like "Holiday Inn" or "Howard Johnson". Have a safe trip back to Brexitland!

I love those old motel signs too. I was wondering the same thing as YP - are the motels still in operation?

I always like the going home part of vacation the best! Safe travels.

one of my husband's many cousins who is an architect is a big fan of the mid-century modern style. when we take long road trips (we were gone for a month once) we always leave the interstate and head into whatever town and look for a small independent mom and pop motel.

You can't fake that kind of optimistic and rosy "future" esthetic from back in the days when the future was something we all looked forward to. It was supposed to be streamlined, pastel-colored, jet-propelled, and easy. It was not supposed to be grungy, right-winged, mean, and poor.

You don't mention a tan, but I do hope that you and Dave stored up a lot of vitamin D for the rest of the British Winter.

I love seeing those old signs too. There are a few left around here. Safe travels back home!

Safe trip home for both of you. I'm a retired electrician and that breaker opening alarms me. Please ask whoever is involved to have it checked. Things go up in smoke in an instant and I would hate to see anyone be harmed. Could be nothing, could be a failing feed line.

Love those old signs, it was a time from my past when things looked a whole lot different than they do now.

I like the old signs. It's surprising that they're still around. Good trip home.

Fun to visit, fun to get home. The story of a vacation.

Great signs! Some of them are real pieces of art - bet they're worth a lot of money to collectors. Have a safe trip back home!

YP: It's true -- the motel business is dominated by chains these days. People like knowing what to expect, I guess. Some of these were in business, and some weren't.

Jenny-O: The Allamanda, the Flamingo and the Cadillac were still operational. I'm not sure what was up with the Sea Breeze, and the Mel-o-Dee Restaurant is, sadly, definitely closed.

Ellen: That's cool! I've done that a few times and it can be a good experience or not. Variable is the word!

Robin: They are very Florida!

Vivian: Yeah. I wouldn't say we got "tans" -- I never really tan -- but we did get some sun. I too miss that optimistic future!

Sharon: I'm sure Route 66 was full of them! (Did that go through Phoenix?)

TJ: Thanks for being worried. I'm worried about it too. My father-in-law says he's going to get it checked out. I am a bit comforted by the fact that the breaker that flips isn't in the house -- it's on an exterior power pole near the meter, away from the structure. Hopefully whatever is failing is there, and not in the house itself. (The house breakers never flip.)

Sue: I would love to have that Mel-o-Dee sign. I remember that place from my childhood many years ago!

I wonder how many of those motels have (or had) crushed velvet, hanging swag lamps like the one you commented on on my blog!
Love this mid-century stuff.

Not sure how much perkier the past was for a lot of people, though---I haven't seen it, but the new movie "Green Book" highlights how hard and unsafe it was for people of color to travel in mid-century USA--many motels accepted only white travelers.

Thanks for sharing your trip!