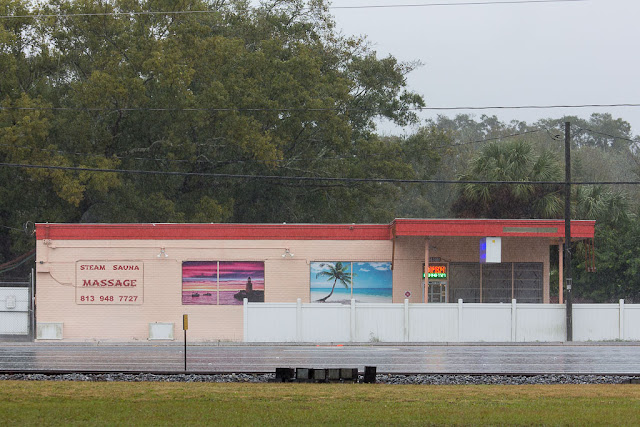 Not the greatest photo in the world, but I hope you can see all that rain! It poured all day yesterday. Dave and I were out and about in it because he decided to make a Christmas dinner for my stepmother, stepsister and her husband and son -- we wound up going to the butcher for a standing rib roast and then to Publix for all the various necessities.

I'm not a fan of grocery shopping, but I always love a Publix. The stores are meticulously clean, everyone is so nice, and they tend to every little facet of your shopping experience. For example, when we left, an employee was standing at the front of the store with a huge blower, drying the shopping carts that had been collected from the rainy parking lot. What other store does that?

Their slogan for years has been "Where shopping is a pleasure," and it's true. (I swear I am in no way on their payroll, although, in full disclosure, I will proudly reveal that my nephew works there.) 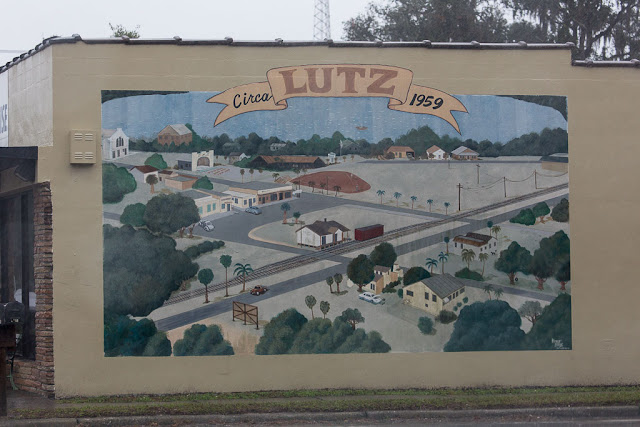 We also stopped at the public library in Lutz, which I used to visit as a child. (The town where I lived, Land O' Lakes, didn't even have a library when I was really little.) It's a low brown brick building, kind of '70s-cool, built on the site of that big open area at upper right in the mural above. Although it's been redecorated and expanded since I was there last (probably 40 years ago!) it was fun to visit again. I was impressed that they have two copies of David Sedaris' diaries. Oh, and they still have DVDs and audiobooks on CD -- so digital discs have not died everywhere.

Dave spent the afternoon cooking and I did laundry and read. Today the Lutz portion of our Florida idyll comes to an end, and we drive into Tampa for a night in the city. 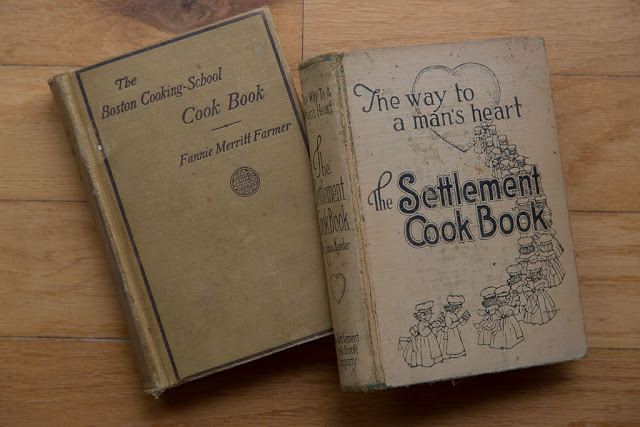 My stepmother gave these old cookbooks to Dave. They were her grandmother's. (My grandmother also had a copy of that Boston Cooking School cookbook -- I think everyone had one back then. It was the "Joy of Cooking" of its day.)

They're full of old, bizarre, elegant recipes like "Capon in aspic garnished with cooked yolks and whites of eggs cut in fancy shapes, pistachio nuts and truffles." There are huge, complicated Jell-O salads like "Royal Diplomatic Pudding." Someday I want to try making some of those things just for the heck of it. 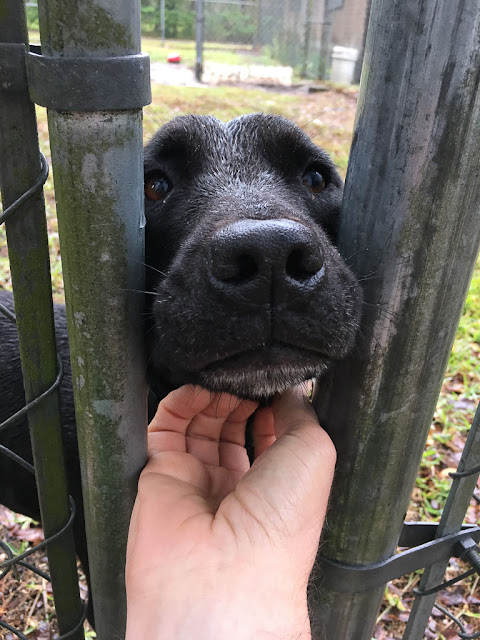 Rainy Maybelline says hello! She has a shelter, but was quite happy to leave it for a scratch, even if it meant getting wet. Priorities!
Posted by Steve Reed at 11:47 AM

Oh, yes, pleeeeeze make that Jello recipe and show it on your blog. My mother was such an awful cook that she didn't even make Jello for us (remember when Chinese food used to come in a can?) but even if you grew up on home cooking in the '60s and '70s in America, you have to ask yourself, "What were they thinking??"

I want to give Maybelline a smooch.

I've seen some pretty nasty looking food concoctions on FB involving jello and as I recall, there were several on offer at the garden club's christmas party/luncheon.

a long flight to ...RAIN! I am sure you are warm, though, and having a great time. Love that dog!
I began baking yesterday but was interrupted by the most fierce wind that blew all of the power away,destroyed the coast line, closed bridges- fourteen hours later - able to bake.

My mother had a cookbook that looked just like the Settlement Cookbook but I don't remember it being called that. But the over looked almost exactly like that with the "Way to a Man's Heart" quote and the little petite chefs. The last time I remember seeing that book it was in pretty bad shape. I bet it didn't last much longer. I do have a few recipes from it that I had copied by hand. I typed up all those hand copied recipes to a computer years ago. I do remember recipes for aspic but, I don't think my mother ever made any of those. Oh wow, that brought back lots of cooking memories.
That also made me think of that book and movie, Julie and Julia! I should watch that again.

I used to have an ancient cook book with pictures and directions on how to skin and cook a squirrel. Unfortunately, it was lost in one of purges of our stuff. Surely that storm system will move out of Florida shortly!

The rain yesterday was crazy! I once lived in a house with a dear friend who had The Settlement Cookbook and we loved making food from it, especially the marble cake - which was more like a grated chocolate pound cake. It is a cookbook with an interesting history.

Rain is easier to shovel than snow :D

Florida. That's "The Sunshine State", isn't it? Maybe you should come to Arizona! :^D

I don't like really rainy days but I don't have to worry about that now!

The Way to a Man's Heart. Don't know whether that phrase holds the same truth these days...
Old recipe books fascinate me and I would read read them from cover to cover and no doubt I would be mystified by some ingredients as the books are American. Jello for a start!
Alphie

Just wondering......why have a dog just to leave it in an enclosed outside space and never take it for a walk ? It seems to be more the norm in US than here where dogs are much loved members of the family and treated as such. Hope the rain stops for you.....glorious sunshine here this morning in Hertfordshire ! Have a great holiday. x