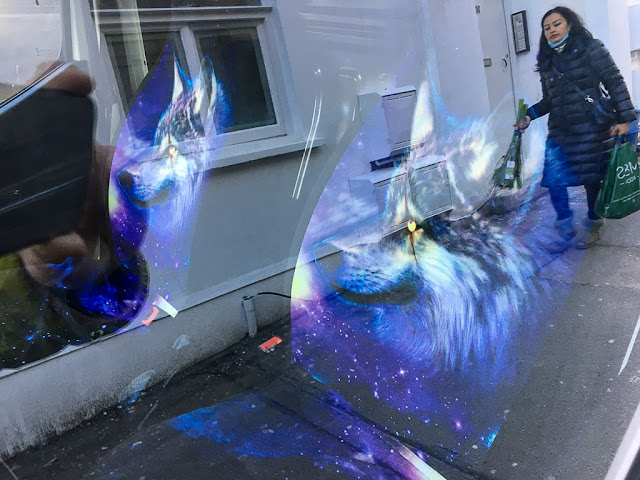 I took this picture on my way home from work yesterday. I was trying to photograph the crazy "space dog" seat covers inside this car, but I wound up with a kind of surreal reflected street scene as well. I like it!

Yesterday was pretty low-key. I went to work as planned, and in addition to preparing books for the seventh graders to pick up, retrieving books from the sixth grade classrooms and going downstairs to make new shelf labels for the Lower School library, I helped the other librarians (working remotely) to compile lists of our e-books of various genres still available to students during the lockdown. Doesn't that all sound exciting? A day in the life.
I noticed that the school aquariums are mysteriously empty. Where did the fish go?! I wonder if we have an aquarium service person like Jennifer's husband Gregg who maintains those tanks. The fish have probably been spirited away to a temporary home while the school building is vacant.

I also posted my newest Newbery review. I've read 38 of those books so far -- so, still 61 to go, counting this year's winner, which I believe will be announced on Monday. Cripes! I'd hoped to finish this project by the end of this school year, but realistically it's probably going to be fall. I shouldn't have stopped during last year's lockdown and summer break. I wanted to wait until I was working face-to-face with the kids again, so I could talk to them about the books, but honestly, they're not all that interested in this little endeavor of mine. At this point it's more for me than for them!

A note about Blogger -- have any of you noticed that the quick-edit tools on our sidebars and posts have disappeared? There used to be a little pencil symbol that, when clicked, took us into edit mode and allowed us to make changes. Those little pencils are gone, at least on my blog. Now I have to go to the dashboard and edit that way. No big deal, but it's a weird change, and funny how it just happened with no warning. I wonder if it has something to do with Flash no longer being supported by Adobe and Chrome.

Dave and I watched "The Matrix" last night. I don't think I'd seen it since it was in theaters, 20-odd years ago. It still holds up pretty well! Remember how Neo and his fellow escapees had to pick up a ringing telephone to be transported back out of the Matrix? Well, that was the only obvious anachronism -- the phones were often public booths on the street or desktop models with big ol' clunky receivers. Funny!
Posted by Steve Reed at 7:16 AM