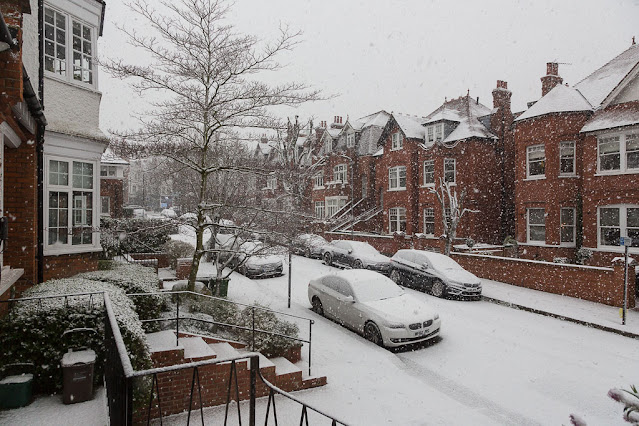 We turned into a Winter Wonderland yesterday morning -- and quite suddenly, too. I'd just finished watering the orchids and was vacuuming the house when I noticed snow coming down outside. And it kept coming, and coming.
I'd heard it might snow but I didn't expect this. I thought we'd get flurries like we've already had a few times this winter.


Here's some action footage of the garden and the patio, including our poor beleaguered primroses valiantly blooming in the winter chill.

It diminished in the early afternoon and I tried to take Olga for a walk, but she wanted no part of it. I did get her to go out into the back garden a few times, and she'd run through the snow and nip at it with her teeth. She clearly found it very confusing. 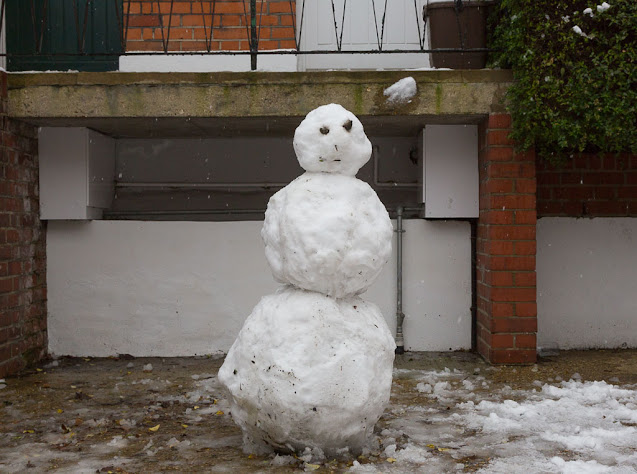 Our upstairs neighbors, the Russians, made a pretty respectable snowman in their parking space in front of the house. I think that's about the biggest snowman I've ever seen on our street! (If there's one thing Russians know, it's snow.)
Anyway, since Olga wouldn't go out, we wound up staying indoors all day. I finished Patrick Ness's book "Release," which was billed as a sort of gay version of Judy Blume's "Forever" -- remember that book? It was quite scandalous when I was in high school. I remember checking it out of the library and feeling like I needed to keep it hidden. Anyway, "Release" was interesting -- it featured two plotlines, one about a gay teenager coping with his already quite active love life and his conservative Christian family, and another about a girl who'd been murdered and was now wandering the town as a spirit. Just as he was struggling for release from his constricting home environment, she was struggling for release from this life. I'm not sure that second plotline was entirely successful -- I found it very weird and I was always happy to get back to the main story. But it did give the book added dimension, I suppose.

Here's something interesting I learned yesterday about English grammar. (Aren't you excited?)

Dave, writing a lesson plan, asked me whether he should use the indefinite article "a" or "an" in front of the noun "1-4-5 chord progression." I told him I'd always learned that "an" is used in front of a word beginning with a vowel -- but even though 1 or "one" begins with a vowel, it clearly didn't sound correct to say "an 1-4-5 chord progression." I got to thinking that actually, there are many words beginning with a vowel that call for "a" -- a university, a uvula, a one-time surprise, a eunuch.

Well, I did some research, and it turns out that the use of "a" versus "an" depends more on the sound of the following word than on its spelling. University and eunuch sound like they begin with a Y -- a consonant. So they take an "a"! Likewise, "1-4-5 chord progression" sounds like it begins with a W -- a consonant. So it takes an "a" as well. (On the flipside, "historic" can take "an" because the H is sometimes silent, although that usage is a bit old-fashioned: "an historic victory.")

I found this fascinating (as you can tell, since I've burdened you with two paragraphs of explanation). I would have known to choose the correct article, but before yesterday I couldn't have told you why.
In more sobering coronavirus news, it now looks like the British government might lengthen our lockdown and keep schools closed through Easter. Apparently there's some evidence that our new virus variant is, in fact, more dangerous as well as more contagious, and infection rates aren't diminishing fast enough. Argh!
Posted by Steve Reed at 7:04 AM