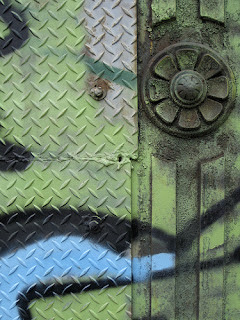 Division Street is an interesting, diagonal street on the Lower East Side. I suppose at some point it must have divided something from something else, but now it's just full of Chinese businesses and colorful graffiti.

Had a minor home-repair emergency last night. The faucet in my kitchen, which has always been a little dodgy, suddenly decided to stop working entirely. So I who know nothing about plumbing got the bright idea to try to repair it myself. I got out my wrench and began unscrewing the top, which resulted in a slow leak around the base. Then I found that I couldn't shut off the water - no matter which direction I turned the valves under the sink, it kept flowing. And then I couldn't get the faucet tightened again to stop the leak.

I called my super, who wasn't answering his phone. I called the management company and left a message with their answering service. And I called a plumber, who informed me it would cost $180 AN HOUR to get someone to come out on a Friday night. I called my brother. I called my mother.

Mom was the one person who answered the phone, but of course all I could do was vent, because she doesn't know anything about fixing faucets either. (Here I am, a 40-year-old man, and desperate times still call for Mom. Kind of pathetic, actually.)

Finally the super called me back and he managed to get the faucet tightened enough to stop the leak. It still doesn't work, but at least my apartment isn't going to flood. Looks like I have a date with the plumber next week.
Posted by Steve Reed at 10:44 AM