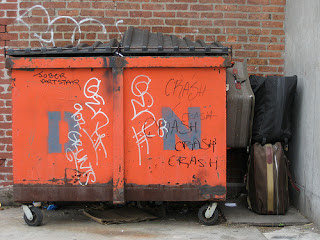 My brother wants to collaborate with me on a book. He thinks we should write about our childhoods, each from our own perspective, which would indeed be interesting because we're very different people and we remember such different things. But I'm not sure anyone would buy it!

He advanced this idea because - in today's world of overscheduled, overprogrammed children - he thinks our childhoods were somewhat idyllic. We were latchkey kids, particularly him, and we had a huge degree of freedom after school to ride our bikes and crash around through the woods and just be kids. We were members of some groups, I the Boy Scouts and he the Little League, but mostly we kept ourselves amused.

He believes we could illlustrate the value of imagination, why it's best to just let kids do their own thing. Plus we have some crazy episodes to recount.

I'm not sure about this book from a commercial standpoint, but I'm actually already a step ahead of him. I've kept a journal nearly my whole life, and one day I began thinking about the inevitable baggage (photo above) contained in my daily journal. Journals tend to be pretty raw, filled as they are with unedited, immediate reactions to situations and people. I decided to write a public account of my life and then destroy my old journals.

So I took step 1, but I never took step 2. (At least not yet.) I have a short memoir of sorts which I always figured I'd just pass on to my niece and whatever other descendants my family produces.

I'm going to start by sending him what I've already written. We'll see!
Posted by Steve Reed at 11:34 AM