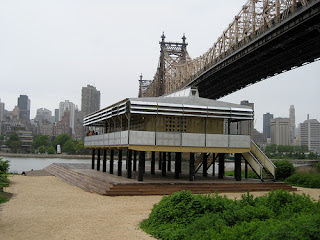 Yesterday I went out to Queens to visit the "Maison Tropicale," a mid-century kit house designed by Jean Prouve for use by French colonials in Africa. It's on exhibit near the Queensboro Bridge prior to being auctioned by Christie's.

I've always liked mid-century design, and this is an interesting structure - a basic metal box with wood floors and these terrific little blue-glass porthole windows. I'm not sure how comfortable it would be in the heat of equatorial Africa, but it's visually pretty great. 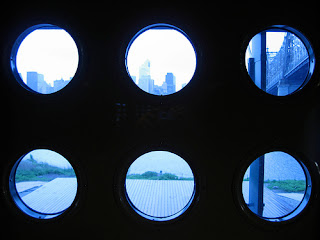 Apparently only a handful of them were ever made, and Christie's expects the house to fetch $4 million at auction on June 5. Anyone need a vacation house?

Today is the AIDS Walk, for which I have been assembling a team of coworkers for the last several weeks. I wound up raising about $1,250, which made me pretty happy. More about that tomorrow!
Posted by Steve Reed at 11:21 AM