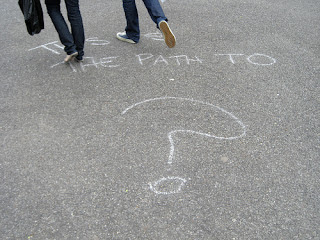 When I took this photo I thought it was funny - Buddhist humor, more or less. But when I look at it this morning, it seems more serious. That's probably because I'm feeling a lot of uncertainty myself.

We got word yesterday at work that my employer's recent financial picture hasn't been all that great. Revenues have been down, and cost-cutting hasn't saved enough money. So the specter of deeper cuts is looming.

No one's said anything about layoffs, at least not yet. But still, I worry about my future. I've worked for this particular company in a number of different jobs ever since I graduated from college in 1988. I've never really had to go out and look for a job from scratch. I wouldn't want to have to start now.

On a deeper level, I'm worried about my whole industry. Journalism has changed so much with the advent of the Internet and the conviction among many people that news should be free. No one wants to pay for a newspaper anymore, and newspapers haven't figured out how to make money from their Web sites. Sometimes I think this is all just a process of painful adaptation; sometimes, I think it's a death spiral.

I can't worry too much about it. There's nothing I can do, aside from doing the best job I can at the position I fill. Maybe nothing will happen. Maybe I'll get laid off and the change will be wonderful. Maybe I'll wind up sleeping in a shelter. The point is, the variables are too great to know, and worrying about an unknowable thing isn't very productive.