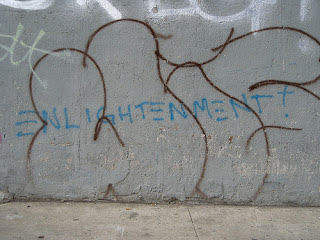 Before I began practicing Buddhism, I had an idea that being enlightened was a permanent state. Once enlightened, always enlightened.

But since then, it's been explained to me that enlightenment - whatever it is - isn't permanent at all. (Just as all other states are also transient, from happiness to anger.) Enlightenment comes in flashes - for a brief second, maybe while meditating, a door opens and the light comes on. Then, though that feeling may leave you with a lasting impression, the door usually closes again.

The trick, I suppose, is not clinging to that feeling of "I get it!" After all, if you're thinking "I get it," then your mind is occupied with thinking and you've already broken the spell of merely being.

On another note, today is my blog's birthday! A whole year of blogging. And how the blog has changed - it began merely as a place to show off photos, and now here I am, blabbing away. I told Pod yesterday that had I found Flickr before Blogger, I might never have started a blog. Funny how things work out!
Posted by Steve Reed at 10:55 AM