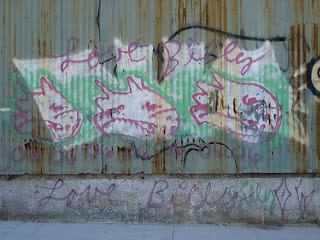 It's funny that I've just been writing about both bird-watching and my enthusiasm for street art, because it occurred to me yesterday that they're really very similar. Bird-watchers (or "birders," as they prefer to be known) collect sightings of birds, making lists of what they've seen and where. And I'm doing exactly the same thing when I wander around town collecting street art photos, and cataloguing them on Flickr.

Sometimes street art even appears in flocks, like these dogs by Love Billy.

Today the plumber comes to fix my faucet. I hope it doesn't cost a million dollars.
Posted by Steve Reed at 11:45 AM