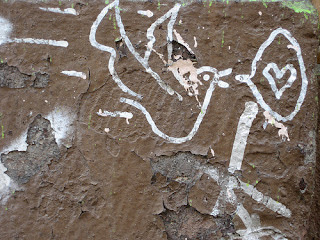 I sat last night when I got home from work - opened the windows wide, put the cushion on the hardwood floor and let the sounds of the city wash over me.

And what a racket - the birds! They weren't singing, exactly - more like peeping, cooing and squawking. There seemed to be a frenzy of evening activity, maybe a time for feeding and socializing before roosting for the night. And it all seemed to be happening in the horse chestnut tree outside my window.

I heard doves, for sure, but I'm not sure what else I was hearing. Sparrows? Starlings? The sounds were more assertive and less musical than the morning songs I hear as I write (like now).

When I sit I don't close my eyes - part of the practice is staying connected with the world, and after all you don't want to fall asleep. I was facing the window, but gazing downward toward the floor. Still, there was so much commotion outside that sometimes I just had to look up and see what was flapping around on the fire escape.

And poor Armenia was beside herself with excitement. She sat on the window ledge, big-eyed, barely containing a plaintive meow every time a dove strayed near.

Was it distracting? Well, sure. But sitting doesn't have to be silent. You just let the sounds become part of the experience, let them come and go, each squawk and coo passing with each breath. You don't hold onto them - which is what I was doing when I began thinking about which species I was hearing. Instead, you just let each sound pass so you can really hear the next one.

I'm so lucky to have this apartment, with a tree outside and so much life in the courtyard.
Posted by Steve Reed at 10:16 AM