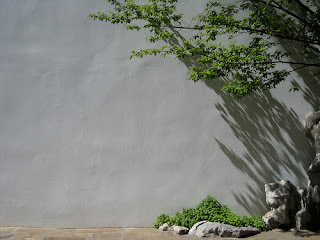 I was feeling adventurous yesterday, so I got myself down to the Staten Island Ferry and went across New York Harbor to Staten Island, which I've only done one other time in my life. It's not that far and it's certainly not difficult - and the ferry is free - so I don't know why I don't get out there more often. It doesn't even feel like New York City. It feels more like New Jersey.

One of the chief cultural attractions on Staten Island is the Chinese Scholar's Garden at the Staten Island Botanical Garden. Some friends from the Zendo who live on Staten Island picked me up at the ferry and we went there for the afternoon. It's modeled on classical Chinese walled gardens where upper-class scholars and bureaucrats found sanctuary from the worries of the world. 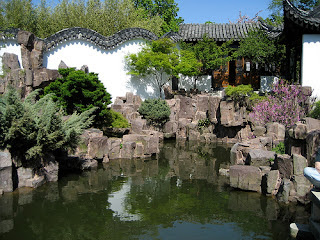 The garden employs elements like a round moon gate and open-grille windows that catch light and create ornate shadows. The white walls also set off the shadows from the leaves and branches of the maples and other trees. The garden unfolds in a series of passages and courtyards with carefully controlled views and plantings. 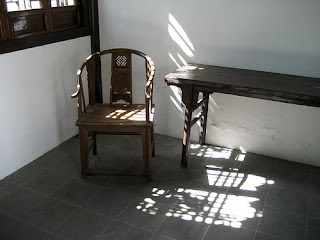 Some of the rooms include furniture, supposedly antique from 19th century China. (Having been to Chinatown, I'm skeptical of anything that says it's a Chinese antique!) Overall, the garden was quite beautiful, though I was left with the sense that the Botanical Garden is struggling a little with maintenance. 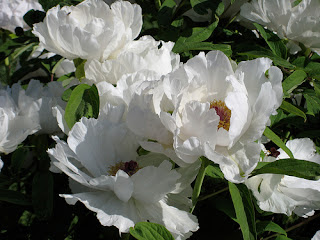 It was also peony time, so we got a chance to see some in bloom. They smell almost like roses, and the single ones have beautiful papery petals.
Posted by Steve Reed at 10:54 AM

New comments are not allowed.