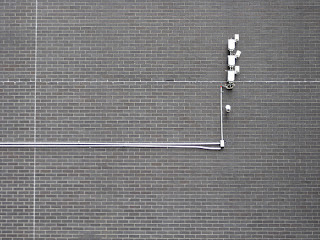 Yesterday as I was leaving the company cafeteria, carrying my cup of morning coffee, I rounded a corner and nearly ran into a man coming the other way. I had two reactions: Instant annoyance at his presence, and a need to define for myself why he was in the wrong place while I was in the right.

It's not really important where we both were in the hallway - in fact, according to traffic rules, I was probably the one in the wrong place. What was interesting, to me anyway, was that dual reaction and how quickly it came.

I think many New Yorkers live with a sort of perpetual low-level annoyance at people around them. There are just so many of us, crammed so close together, and we're always in each other's way. When I go to other cities I marvel at how spacious they feel compared to New York.

The instinct to blame him was a surprise, at least to me. There was a reflexive close-mindedness to the idea that I could be in the wrong. What inner insecurity or defensiveness brought that on? And even if I felt I had to deflect fault myself, why didn't I think of it merely as the unhappy accident it almost was, the result of blamelessly shared trajectories?

Of course, I didn't express any of these reactions - I just smiled and apologized. But how quickly our minds can classify and judge!
Posted by Steve Reed at 10:54 AM