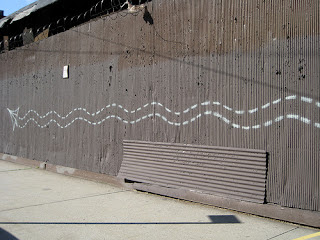 I had a glorious day yesterday! The weather was nearly perfect - a little on the cool side, but sunny and brilliantly clear. It was a great day for walking.

So after going to the Zendo in the morning, I went out with plans to walk over the Williamsburg Bridge to Brooklyn. I did that walk last fall and got tons of great photos of street art on the bridge, so I thought it was time to check out the scene once again.

Oddly, the bridge was not as productive this time, though the view of the city from high over the East River was well worth the trek. But I did get more photos both on the Lower East Side and then in Williamsburg. In fact, I came back with about 80 pictures, and that was after being painfully selective. I think I initially took about twice that.

My current fave is the artist who did the work above. He goes by the name of Bloke (so I assume he's a he!) and his specialty is paper airplanes. You find them on stickers and on huge walls, tiny ones and big ones, all flying and soaring and zooming with a variety of jet trails in their wake. They're so fun and they seem so positive, evoking thoughts of flight and childhood games. 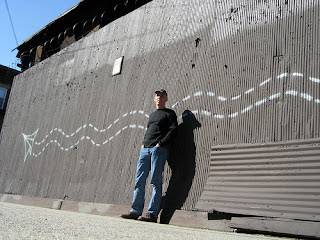 Here I am with one of Bloke's larger creations. I set the self-timer on the camera and propped it up on my backpack, which is why it's at kind of a weird angle.

I've really had a ball the last few weeks adding to my collection of street art photos and learning more about the artists and their identities. The collecting impulse is interesting. I do feel like I "have" something when I take a photo of a good piece, although the ownership is certainly an illusion (as almost any ownership is). 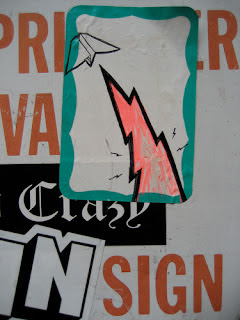 I particularly like taking photos of the little stickers that probably aren't long for this world, preserving them and putting them up on Flickr to share. And what amazing exercise - I walked for about four solid hours yesterday!
Posted by Steve Reed at 11:27 AM