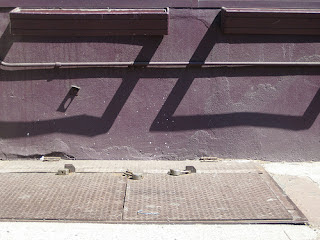 My employer is doing some housecleaning, and for three days has been holding silent auctions for employees to buy old wall art, outdated equipment and small items like ashtrays and corporate china. Yesterday, as I was checking out the auction, I found a terrific framed black-and-white photo of some kids playing on a sculpture with the twin towers of the World Trade Center in the distant background. I liked the juxtaposition of the happy kids with the sad image of the WTC. So I bid on it.

As the auction wound down a few hours later, I went to watch the final moments and to make sure no one outbid me. As it turned out, I and two women were hovering over this photo. One of the women bid; I bid against her. She picked up the pen again and wrote her name, then stood there as the last minutes ticked by. She waited and waited, apparently thinking. It was obviously a strategic ploy to delay so she could pop in her bid at the last minute, blocking us from acting further.

The second woman got annoyed. She demanded that the first enter a bid. The first woman remained silent, contemplating the picture.

"I can't believe this," the second woman said, glaring at me.

I decided right then and there that I was going to remove myself from this battle. I did not want this picture badly enough to alienate people I would later encounter in the workplace.

The first woman wrote her bid just as the bell rang. The second woman threw down her pen and sternly reprimanded the first woman for playing dirty pool. She stalked away.

I smiled and congratulated the first woman. As it turned out, she bid $65, which was more than I would have paid anyway.

Auctions really are terrible things. Everyone gets so tense. And in the workplace they're especially dangerous. I hope that second woman never needs a favor from the first, or vice versa!
Posted by Steve Reed at 11:01 AM