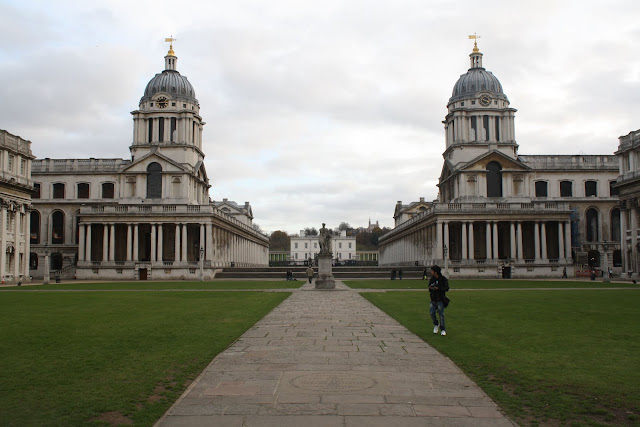 Yesterday I met up with Sally and Liz for a wander through Greenwich, downstream from central London on the Thames, and the site of history, architecture and Greenwich Mean Time, not to mention the Prime Meridian. I also indulged in a bit of unabashed consumerism, which for me is pretty rare!

We met with our respective spouses -- and Sally's daughter Sorren -- for brunch at a pub near Blackheath train station. We had fun jawing about crazy American politics and other phenomena, which was good for me since lately all I've been able to think about is geriatric dog care. Then Liz's Andy and Sally's Mike and Sorren went home, and Dave went back to Ernie and Ruby. That left me, Sally and Liz to wander.

We crossed Blackheath, which is basically a big open field where guys were playing football (aka soccer), and crossed into Greenwich Park. We walked along an avenue of ancient chestnut trees to the Royal Observatory, which became the home of the Prime Meridian -- or the zero mark of longitudinal measure on the globe -- by international agreement in 1884. (Not that long ago, in the grand scheme of things.) We walked around the edge of the observatory, a collection of very ornate brick buildings, to a spot where you can actually stand astride the line that marks the Prime Meridian -- kind of silly and arbitrary, really, but fun! Then we went to an overlook with great views up and down the Thames. 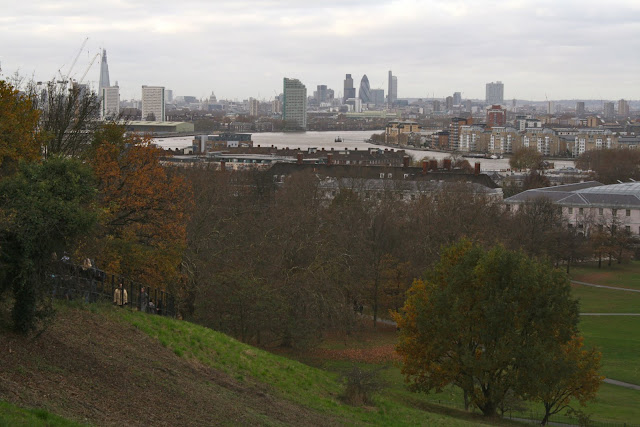 That's central London in the distance -- you can make out "The Shard" on the left and, amid the other skyscrapers, "The Gherkin."

We avoided pushy squirrels on the observatory grounds and descended to the river, where we walked among a collection of buildings designed by Inigo Jones and Sir Christopher Wren. Some were the former Royal Naval College, one was a palace for Anne of Denmark, and some of the space is now used by the University of Greenwich. 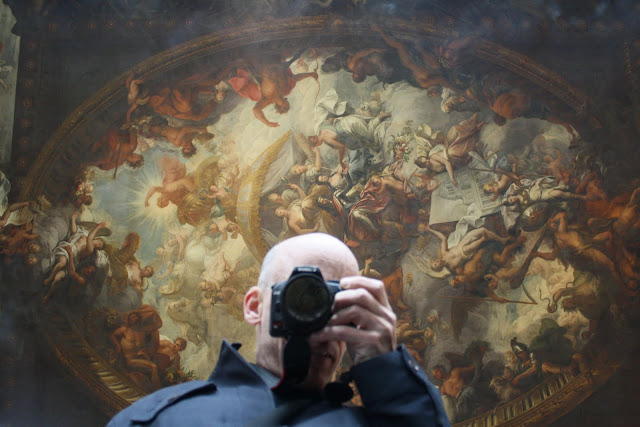 In the Royal Naval College, where the buildings were designed by Wren, we saw the Painted Hall, meant to be a dining hall and decorated with elaborate murals by James Thornhill. The murals are loaded with figurative personifications like History, Age, Youth, Valor and Europe, along with various royalty of the era. There are mirrored tables to view the ceiling by looking down at the reflection (above), which is easier than getting a crick in your neck by looking skyward for ages.

We skirted the National Maritime Museum and the Cutty Sark, which is being restored after a devastating fire in 2007. We ended the day at the Greenwich Market, where lots of vendors were selling food, crafts, art, clothing and other fun stuff. I bought a couple of great t-shirts, one for me and one for Dave, a pair of cups depicting boars and foxes, a new credit card holder made from an old recycled London map, and yet another used Bill Bryson book. Oh, and earlier in the day I got a blown glass Christmas ornament, which may or may not become a gift for someone.