My first visit to London in 2000 is kind of a blur -- I was here for just a few days, meeting my friend Arthur for a joint trip to Paris. Arthur was in London on a business trip for Barnes & Noble, where he worked at the time. (I think he was here for the London Book Fair, if I remember right.)

Anyway, our first night out was quite eventful. From my journals of April 19, 2000:


Our hotel on Norfolk Square turned out to be something of a dump, but the people are pleasant and I suppose you get what you pay for. There's no major difficulty -- it's just very scruffy looking, and the bathroom is so small you've got to sit sideways on the toilet.

Arthur and I met his friends Tracie and Hillary, who were running the London marathon, at a cool bar called Zander. We ate out ourselves at a fashionable little spot and then went to a pub where some of the denizens were staggeringly drunk -- one guy threw a glass, an act that prompted his banishment. We wound up at the Hard Rock Cafe, where the waiters performed an amusing trick -- one sprayed whipped cream onto the shaved head of the other, topping it off with a swizzle stick. They did that trick twice, and I was only there for two beers!

For my birthday yesterday, I wanted to go back to Zander, the "cool bar" Arthur and I visited on that trip. (According to the World's Best Bars web site, Zander is Europe's longest bar, with 36 meters devoted to "the art and science of seriously stylish drinking.") So Dave and I met at the St. James Park tube stop and walked to Zander, which is located in a nearby hotel.

Unfortunately, I don't have any photos of Zander from 2000, and I didn't take any last night, either. It's still a nice space, and it's configured the way I remember, though I'm not sure about the chairs and the purplish color scheme. (I guess it makes sense that might be different by now.) It was pretty busy for a Wednesday evening. After a martini (ok, two martinis) we made our way to dinner at a nearby pub, the Phoenix -- where, happily, we witnessed no breaking glass.

I can say this: Zander's business cards used to be a heck of a lot cooler. The cards at the top are from that first trip -- I was so impressed with them I saved them in my journal. Here's what Zander's card looks like now: 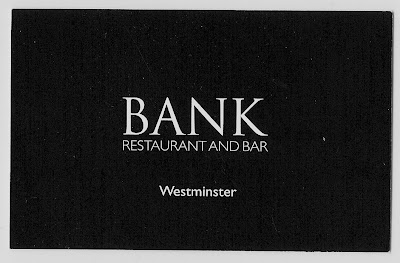 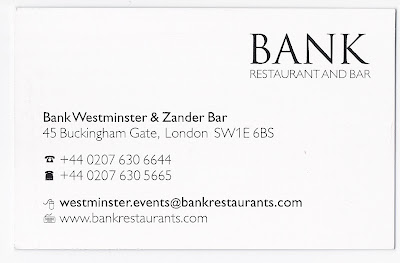 Not a change for the better! It seems they've de-emphasized the Zander identity in favor of this Bank Restaurant, whatever that is. I asked a hostess how long Zander had been associated with Bank, and she said she didn't know. She asked around and no one else seemed to, either. Oh well -- institutional memory is short in the service industry, and 11 years is a lifetime!
Posted by Steve Reed at 6:22 AM

I'm glad you enjoyed Zander a second time around. Sometimes our memories are better than the real thing.

You do have a very good memory, but then I guess your journals help a lot! :)