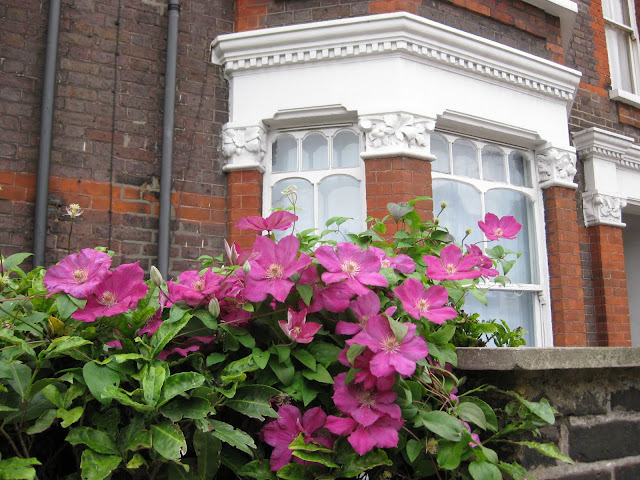 Marmite is one of those quintessentially English foods -- you never hear about it anywhere else in the world, except in regions where England once put down colonial stakes. It's brown and dense, basically the salted sludge from the bottom of beer-brewing kettles. (Kind of ingenious that it was ever turned into food, really.) It's eaten as a spread.

I long believed I didn't like Marmite. (Although, to be fair, I hadn't tried it -- I'd had Vegemite, a similar but apparently not quite identical product from Australia.) It's incredibly salty and packs a powerful punch. It tastes like nothing else. I can only describe it as tasting very brown.

When we moved to London, though, I bought a little jar. I thought I'd give it another go. And I've discovered, to my surprise, that I like it, at least under certain circumstances.

Here's the secret to enjoying Marmite: butter. A toasted crumpet (aka English muffin) topped with a swath of butter and a thin spreading of Marmite is a pretty great snack. Marmite also occasionally turns up as an ingredient in recipes, but Dave and I haven't cooked with it yet.

So allow me to hereby revise my opinion of Marmite. I still wouldn't say I love it, but when this jar runs out, I might go ahead and buy another one -- much to the chagrin of Dave, who finds it horrifying.

(Photo: On my walk to Willesden Green, Monday.)
Posted by Steve Reed at 7:51 AM

Maybe I should have tried it while I was in England. I've tried, even with butter, here on American soil but have been unable to like it - and you know I'm such an Anglophile, I TRIED.

It does taste brown. That says it all.

I've tried this too, several ways and just never took to it. Yuck is all I can say.

We have a store in Cincinnati (Jungle Jim's) that sells marmite. I used to live nearby & would get it for my boss at the time. She was raised here, but her parents are British. I thought it was the most vile stuff I had ever let touch my tongue, but to be fair, I've never tried it on a buttered crumpet :)

it has been a staple in my house long before i ever visited england. i can't remember how i was introduced to marmite but i have been eating it (primarily on toast - buttered, plain, or with melted cheese) for 30 years!

i even had a squeezable jar - but must admit to preferring the traditional glass container.

happy to learn that you are acquiring an appreciation for it! maybe in time dave will moderate his stance