Yesterday I visited one of the most touching war memorials I've ever seen -- the "Animals in War" memorial on Park Lane in Mayfair. Sculpted by David Backhouse and unveiled by Princess Anne in 2004, the memorial has its own web site here.

"Many and various animals were employed to support British and allied forces in wars and campaigns over the centuries, and as a result millions died," it reads. "From the pigeon to the elephant, they all played a vital role in every region of the world in the cause of human freedom. Their contribution must never be forgotten."

The animals are shown laden with wartime equipment, entering a stone gateway... 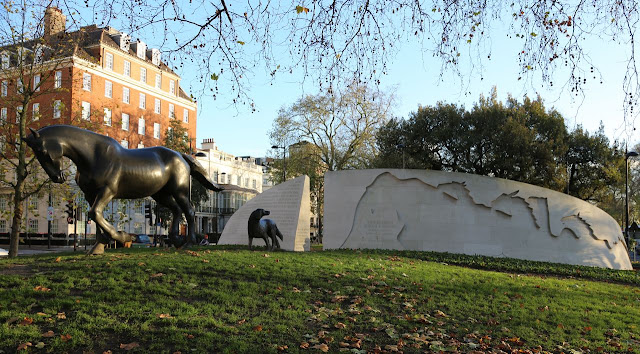 ...and emerging on the other side, freed of their burdens.

It brings tears to my eyes, it really does! I mean, any war memorial is touching -- but at least when humans are involved, they (or their leaders) are responsible for the conflict. The animals are responsible for nothing, and yet suffered as much as any other veteran.

It's great to see all the wreaths and other items left at the memorial, reminders that people take the contributions of the animals seriously.
Posted by Steve Reed at 6:22 AM