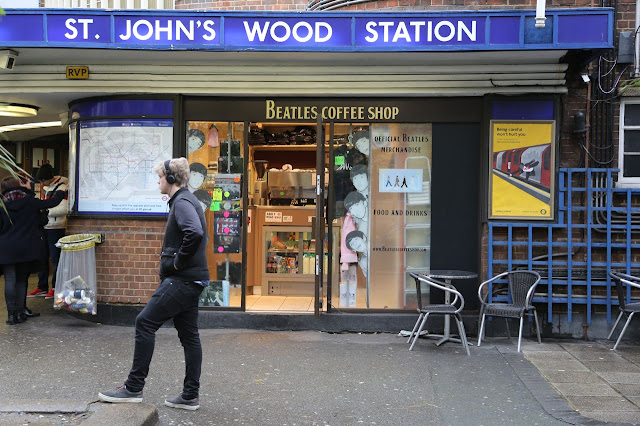 The Beatles are still omnipresent in London, with their own dedicated coffee shop at the St. John's Wood tube station, and a Beatles store on Baker Street. (I assume these are officially sanctioned establishments, considering how tight the owners of the Beatles copyrights are.)

I wonder if that kid is listening to the Beatles? Probably not. Probably Adele or the Arctic Monkeys or whoever kids listen to these days. 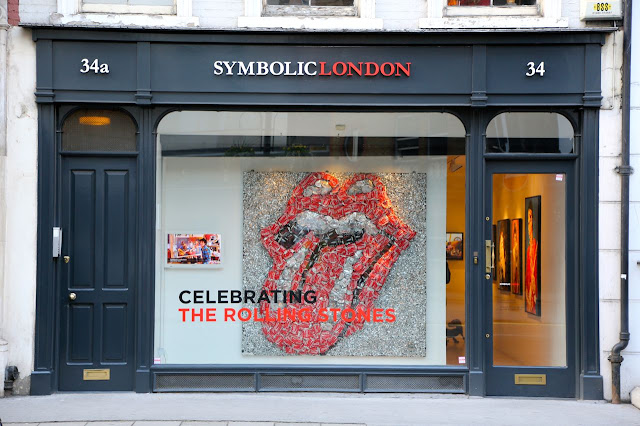 Those among you who may be more Stones than Beatles will be pleased to know that the Stones are omnipresent too. I didn't go in this exhibit when I saw it in Mayfair on Thursday -- being more Beatles myself -- but you gotta love the lips made of Coke cans.

It's dipped below freezing the last couple of nights, so I've been bringing in a few of our plants: the horseradish, which is just a pot of dirt at this point, since the leaves have all died back for winter; the potted heather; the plumbago. I think the first two would probably survive if I left them outside, but when plants are in pots it's a tricky business -- if the roots freeze, it's all over. Our lavender I've been leaving outside. I sort of hope it dies, honestly. It's seen better days.

I first brought the plants in on Thursday night, and within minutes the apartment was buzzing with four fat, slow-moving houseflies. I guess they were hiding in the heather, and when the warm air hit them they activated. I managed to herd them back outside yesterday.

Last night I watched an old Richard Burton and Joan Collins movie from 1957 called "Sea Wife." I have a bit of personal history with this movie. Long ago, while in Miami for a journalism convention, I had a fling with a guy I met there. We sat up in his hotel room one night and watched parts of "Sea Wife" on TV. But I'd never seen the whole movie because, after all, we were having a fling and there were better things to do. So last night I finally saw the whole movie!

I suppose it's a sure sign of advancing age -- and wisdom -- when you'd rather stay in with your partner in your cozy home and watch Joan Collins than go out and have a fling with someone you just met. Thank god those days are over.
Posted by Steve Reed at 7:34 AM

I was always more Beatles than Stones but I never saw them in concert and did see the Stones. I know a guy though who is absolutely obsessed with the Beatles.

Beatles, Stones, flings- it's all cool! Not such a distant memory actually. My kids listen to dub step when they want to re- energized- takes some getting used to, just like all new sound does but now I actually like it. Go figure...and yes the flies are trying to squeak out another moment of being flies in our house. They are very slow and I don't mind them- they are cute- I like to watch them wash their little faces.Sea Wife is one of my cousins favorite films- keeps mentioning it , for YEARS now, I have not seen it mostly because he raves and his raves are generally gin soaked, so, maybe now I might give it a chance...

I am a Beatles girl myself. Never really did get the Stones. Oh well..

I am not familiar with Sea Wife but I just might have to see if it's on anytime soon on cable.

Staying in with a loved one and watching a movie is always best in my opinion!

Ellen -- I would have liked to see either group in concert back in the day. The Stones still tour now and then, which is pretty amazing.

Linda Sue -- I certainly wouldn't call "Sea Wife" a favorite. It's melodramatic and a bit simplistic. But it's worth watching at least once!

Lynne -- I like a handful of Stones songs, like "Waiting on a Friend." But I've never owned any of their albums, and I own a stack of Beatles albums.