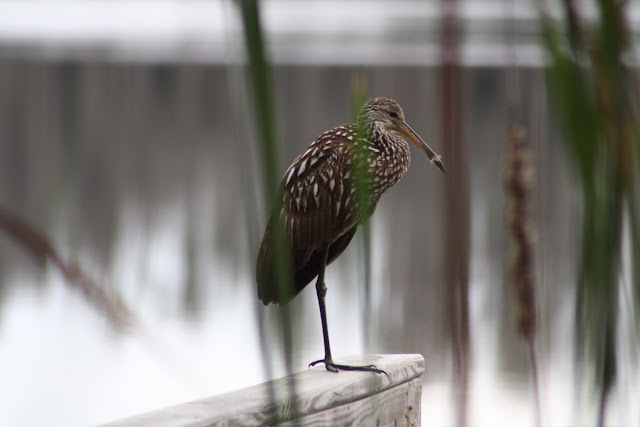 This limpkin was standing on our dock yesterday morning, preening. Limpkins eat apple snails, and there was concern several years ago when a new, invasive variety of apple snail began replacing the native Florida snails. The new ones are huge -- fist-sized -- compared to the smaller native ones. Scientists were afraid the change would have a terrible effect on the limpkins. But apparently they've adapted, because my mom said she's seen them eating the bigger snails, and in fact we saw dozens of snail shells on the lakeshore. And we've seen or heard plenty of limpkins.

So that's happy news for Christmas, right? (Maybe not if you're a snail.)

I hope everyone has a great day today, whether it's Christmas or not in your particular household!
Posted by Steve Reed at 10:28 AM

one snail makes a meal now instead of the many little one it took before. I guess the limpkins are thriving!

I've never heard of a limpkin before. Cute bird! I sent you an email about your login info for my blog just in case you want to visit on your visit. I have a new camera toy! ;)

Hope you day is a good one!

you mention in a later post that you're not a bird photographer, but i would say your pictures contradict that statement. i love the recent influx of bird pics and the family travel stories. as always, reading your blog is like visiting a friend, which sounds a little creepy but such is the way of the internet.