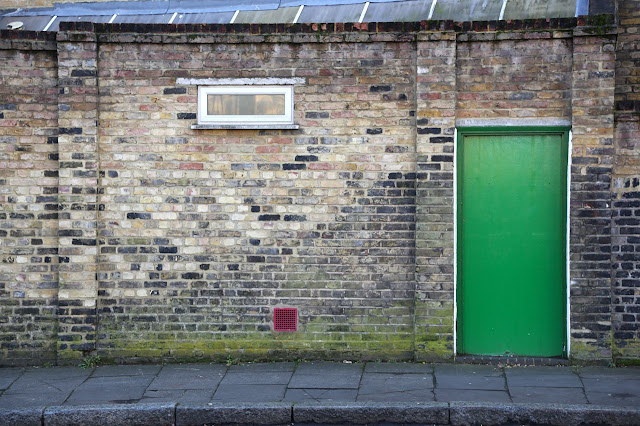 I am a believer in keeping Christmas simple -- and this year I have gone to extremes in that regard. Here in London, our Christmas is about as simple as the wall above. (I photographed it Sunday in the South London neighborhood of Brockley, purely because of its Christmasey coloring.)

As I've already said, we decided against a tree, since we're flying to Tampa on the 22nd. Having a tree seems pointless. I haven't even tried to do anything fancy with wreaths or boughs of greenery. I learned my lesson last year.

In fact, this is the extent of my decorating: 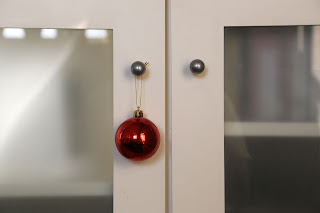 I found that ornament on the street, brought it home and hung it from our living room cabinet. There you have it -- Christmas!

I've already given Dave his present, an iPad, because he needed a new computer so badly that I thought early gift-giving was in order. I've also bought some very basic, inexpensive gifts for our families. We have a few holiday gatherings to attend, which will be fun. And that's about it!

Instead of focusing on Christmas, I prefer to think about oddball trivia:

-- I've mentioned the British TV show "Embarrassing Bodies," in which doctors treat all sorts of medical maladies. Yesterday they happened to mention the largest kidney stone ever measured: 17 centimeters across! They described it as "the size of a small hedgehog," which cracked me up. (So far in life I have been mercifully spared a kidney stone.)

-- I am being peppered with Internet spam, both in blog comments (which Blogger screens quite effectively) and in e-mail. Yesterday I got a spam e-mail with the curious subject line, "Parrotnose invites you to see her private vids." Ummmm...no thanks.
Posted by Steve Reed at 6:20 AM

I would love a print of that photo with the green door -- do you ever enlarge and sell them? I'm quite taken with it.

And I love your holiday decor -- so simple, so elegant!

I almost missed the little red grill vent in the photo until I read that it was Christmas colors! LOL!

Simple is sometimes best. Especially when you aren't going to be home for the holidays. I did minimal decorating this year, leaving some things still packed away.

Spam is a pain and the biggest reason why I took my blog private. I got tired of deleting them--up to 20 per day! Parrotnose sounds truly scary ... !

I do so love your holiday decoration! Perfect!

Sometimes I open spam, mostly the letters from Nigeria, I guess, which have the word "dearest" in the title because the letters are so strange and otherworldly and trusting and of course, complete scams and who in this world believes that a poor, widowed woman who is dying wants to send them millions of dollars? No one. But.

I would not mind finding an iPad in my stocking.

That is the most elegant Christmas decoration ever.

I don't celebrate Christmas myself. Oh, I buy gifts for the grandkids and kids, for my sister but that's all. No baking, no decorating, no stress. If I did, it would be a pagan celebration for me since I don't believe in the Christian gods. In fact I don't do religion at all. Any religion.

Parrotnose is my screen name!

This is actually a christmas worthy of celebration- Washington State passing my favorite laws- Mary Jane and same sex marriage- WOOT! And Godzilla- there is always Godzilla! Also another law passed- to allow grocery stores to sell liquor- so I can do one stop shopping and bring home the cheer! It's all good! Until this year liquor was only sold through the state stores and their hours were like bankers hours- the stores were like fortresses and if you bought more than the usual one bottle of whatever you got the EYE! I shop once for liquor all year- stock up for whatever may happen during the year so I am suspect...
Parrotnose- sounds intriguing- might have to set up the lap top for my bird and have him watch. He is a great critic. He lives downstairs because his voice is TOO LOUD! Who knows the shenanigans he gets into- he could be Parrotnose...

LOL at Dave. But I think that Linda Sue is Parrotnose - I mean, look at that profile pic!

I never get spam anymore - I don't know why. Maybe it's because I don't allow anonymous comments. Or maybe I'm just that obscure!

LOVE the picture - it would be a cool Christmas decoration all on its own. I think I saw a picture of that ornament from when you found it - right?

Elizabeth: Thanks! I have sold a couple of poster-sized prints here. Email me and I'll let you know how much it would be. It might be easier for me to just send you the full-sized digital file and you could get it printed there.
SReed99342@aol.com

Lynne: Spam can occasionally be entertaining -- but yes, it's usually annoying.

Ms Moon: I always read those Nigeria things. They are so damn funny sometimes. I mean, why would some faceless functionary in the office of the UN High Commissioner for Human Rights be writing to ME to send me his ill-gotten millions? Do people really fall for those?

Ellen: In my family we've always kept Christmas pretty simple. So I can identify! I tend toward more philosophical religions, but I don't do God-in-the-sky type stuff.

Utahdog: Dammit, I thought she send her vids just to ME. That hussy.

LindaSue: Yes, you guys have had some big news out there in Washington! Woo hoo! So exciting! The world really is changing for the better, I think.

Bug: You gave me a great idea! I blocked anonymous commenting too. The vast majority of my spam comments were anonymous. We'll see if that works! I really don't want to turn on that Google word-verification thing again.