Ice on the Pond 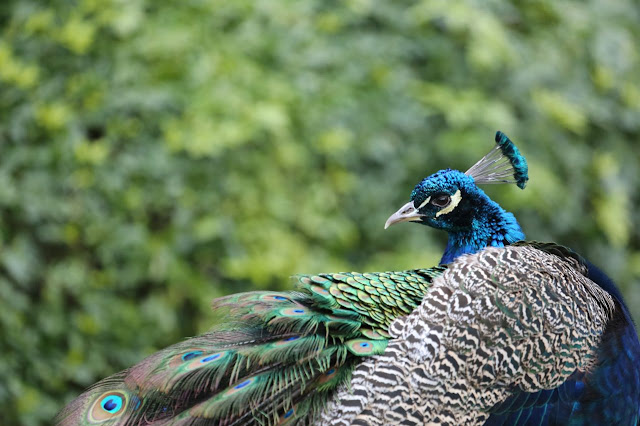 It was really cold yesterday. I went over to Kensington Church Walk to get Dave's good kitchen knife sharpened, and took a detour through Holland Park on the way home. The ponds in the park were iced over, and virtually no one was out. I saw a few lone individuals sitting bundled up in the cafe or on benches, or wandering along the leaf-strewn paths through the woods.

It seemed to match the mood of the wintry day that virtually everyone I saw was solitary.

The glorious peacocks in the Japanese garden seemed utterly unfazed, though. I disturbed the one above in the middle of a long and arduous personal grooming session. It's hard to look good, I tell you.

You can see how people might have trouble believing in evolution. Look at that bird. Could that really happen through natural selection and hybridizing? That little spray of perfect feathers on his head, those big turquoise eyes on his long sparkling tail? Really? 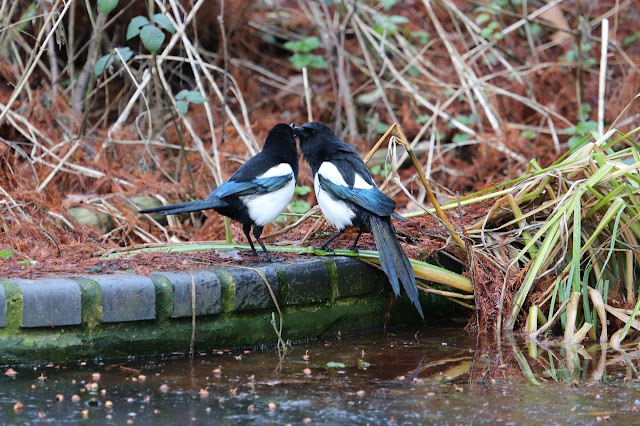 These magpies were taking a noisy bath in an unfrozen corner of one of the ponds. They seemed to be doing a dance with each other. I couldn't tell whether they were arguing or being amorous. It seems awfully early in the season for amorousness.

Anyway, only a few hours after I got back home the woman from the knife shop called to tell me Dave's knife was ready. I couldn't face going back again for it yesterday, so I'll go get it this morning. I think today is going to be a bit warmer.

I've been making progress in "Vanity Fair." I've set a goal of 50 pages a day, and for the last few days I've been hitting my mark. Last night, while Dave was away at his final concert of the season, I watched the '50s British espionage movie "The 39 Steps," which I liked even though some of it was patently ridiculous. I guess that's usually the way with spy movies, isn't it?
Posted by Steve Reed at 6:48 AM

I'm with you on being wowed at the utter beauty and nearly ridiculous perfection and weirdness of nature. Your peacock photo is a marvel.

Yes. Even in the reader, that peacock picture blew my mind.
Mother Nature can get mighty fancy, can't she?

The great thing about peacocks is that they seem to know they're gorgeous - they're so much fun to watch.

I don't blame you for not going out into the cold again. I assume you have nice warm footwear & socks? Show us a picture - ha!

Oh & one other thing I did on my blog that cut down on spammers is that I moderate comments on posts older than 14 days. Because most of my spam came from older posts anyway.

You sound like your weather is colder than ours! We had our first really hard freeze last night and everything is covered with a heavy coating of white.

The problem with creationism is that it answers every question with the same answer.