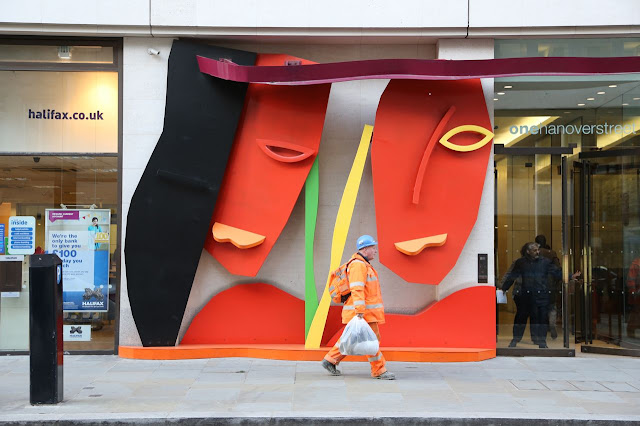 As I expected, my photo book proposal was rejected. Here's the editor's sobering and slightly rambling verdict on my submission:

"While it's always great to take a look at the work of an avid image maker such as yourself, the fact is that there is an abundance of work out in the world that has shots of shop fronts, street signs and what I call the 'fun and the found' in the urban environment. The commercial prospects, from the point of view of a publisher such as (this particular company), of books based on those visual themes is simply too challenging for us to consider taking such books on. For those reasons, and with regret, I will not be taking the opportunity to pursue your proposal further. My own personal opinion is that such books are an entirely different proposition using a self-publishing model, such as the one you are already using as the work will be seen and find an audience that follows you. I urge you to continue in that vein."


Perhaps he's unfamiliar with "The Elements of Style" and its emphasis on economy of language.

Bitchy sour-grapes crankiness aside, I appreciate that he was nice about it. And as several of my readers reminded me the other day, I'm really shooting pictures because it's fun. I can't lose sight of that. Life goes on!

In other news, my gold dental inlay fell out again. You may remember I dealt with this back at the beginning of September. This time, because it happened on a weeknight (while I was eating salmon, hardly a dentally challenging food), I was able to simply call the dentist across the street and get an emergency appointment to have it reinstalled. I did have to pay a whopping £17, but I'm fine with that. I think this guy used more cement than the last dentist, which may be a good thing, although the filling doesn't seem to fit quite as well -- perhaps because there's more cement. I don't care. I just want it to stay in.

I once chipped a tooth eating tuna fish salad. That tooth was obviously ready to be chipped.
Yeah. We do what we do because we love it. Fortunate indeed are those who make their living doing whatever that is.
Frankly, I think that was a lovely rejection letter. It certainly wasn't a form letter.
Believe me, I know from rejection letters.

I started doing the cast glass pieces for my own enjoyment and fun and then somewhere along the line I decided I wanted to be a gallery artist and not rely on the commission work and for about five years that was my goal. Well, it didn't work out for me and demoralized me and I didn't do any cast glass work for about two years. I was working all the time because to be a gallery artist you have to produce a lot of work and this stuff takes a lot of time and then the shows were so depressing. I finally let go of that goal and now it has become fun again. I'm only making a few pieces a year but they are very complex pieces and I'm OK with that.

I wouldn't worry about the turn down- your photos are fabulous- probably have a larger more appreciative audience in the states where store fronts like those you have photographed are more interesting- London is so full of them they may be too common place- like seeing shots of the sea and boats and mountains would be here. Don't give up, the idea is splendid and there is an audience!!! When you have time to see a better dentist have your crown reseated properly or it will give you grief down the line and you may end up in more pain than you could ever imagine- the cost would also be astronomical if you require an implant later because of poor seating, bacteria can be a bitch!

I really enjoy your blog and photos and wanted to share an exhibit that I say the past weekend, there are always alternatives.
http://kevynbashore.com/365-day-project/
best of luck!

Steve, I think those faces need dental work too. At least I took those to be gap-toothed grins! :) I agree with Linda Sue. You need to find someone to fix it correctly or you might be sorry. I've got plenty of crowns and dental work in my mouth and when something does not fit right it's always a problem.

Sorry about the turn-down on your book but at least he was nice about it.