Any Day, Every Day 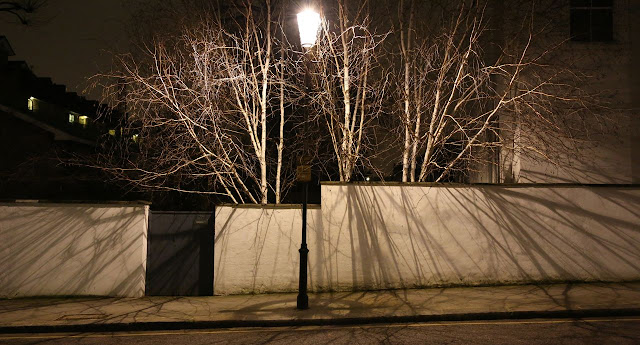 Dave and I took Olga on a walk yesterday up to Trellick Tower, so I could photograph the latest graffiti in the courtyard, and then over to Golborne Road so we could pop in to the fishmonger. Dave wanted some sea bass for a recipe involving baking whole fish inside a crust of salt. He wound up buying two red snapper instead, and last night he tried this technique, which looked like baking two white pillows. It worked really well. The fish were great.

Olga is a complete nut on her leash. She runs this way and that, wraps herself around my legs, eats bits of detritus off the street, and strains like she wants to tear off into the sunset at 100 mph. And God forbid she should see a pigeon -- she rockets ahead and just about takes my arm off! However old she is, this dog still has a lot of puppy in her. I pull her back and try to keep her walking at a reasonable pace, but I also let her indulge some of that inner puppy. She is a dog, after all. I'm hoping that as she gets a bit older some of the craziness will subside. (In other words, I want the problem to resolve itself with no work on my part. That's realistic, right?!)

I had hoped we'd be able to take a day trip this week, since Dave is off school for February break, but I would have to organize it and I just haven't had it in me. (Dave would just as soon stay put.) I did find a place to take Olga for doggy day care, but beyond that I haven't done anything. Maybe today I'll get motivated.

Consequently, that's pretty much life around here at the moment. No great excitement!

(Photo: I was walking Olga the other night when I came across this dramatic spray of shadows on Portland Road in Notting Hill. I went back to photograph it later, without the dog!)
Posted by Steve Reed at 6:28 AM

You might consider getting a Halti or Gentle Leader to walk her on. We have to walk Bella with one because she pulls so much and it does help to a degree. She can still tuck her head under like a horse with a bit in its mouth when she wants to and bolt but then I just let go of the leash. I've had too many injuries from that in the past. ;)

Do you know how old Olga is? She looks like she's still in puppyhood to me.

And yes to the day trip! Just do it!

I have no dog advice for you. Actually, I have no advice at all. But I do like that picture. My sweetie and I have been trying to get away together too and it's just not happening. Driving me nuts because I want so badly to just...run away.

I guess I'm with Dave - since I work so far away from home sometimes it's just bliss to have a few days of nothing planned :)

glad you went back- stunning shot! Olga needs to run- I felt like that once upon a time- Not now- so I think that when Olga gets to be an old lady she will not want to run so much- How patient are you?

Our poodle is going to be nine years old this April, and we're still waiting for her to calm down and relax. She is quite well-trained, but her enthusiasm has never subsided, and my dreams of a lazy, placid dog are just not materializing.

A super night shot all about light & shade.