I call this "Self-portrait with dog, in the window of a Japanese restaurant." Ha!

I've actually been casing out this restaurant for a while, trying to get a photo. It's such a quaint little place, with the plants and those cartoon kittens in the window. Usually cars are parked in front, blocking the view. But yesterday, when I walked past with Olga, a woman was sitting there in her SUV, the engine running, looking as if she might be about to drive away.

Finally, having returned a third time to find the woman still there -- but the car behind her gone -- I knocked on her window and asked her to back up so I could take my photo. 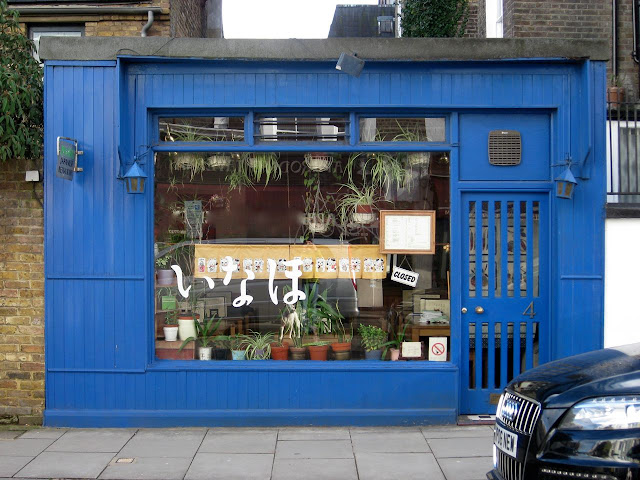 She obliged, but her SUV was so big that its nose stuck into the frame anyway. I also got some really terrible reflections in the window, which I rather clumsily removed with photo-editing software.

Bottom line: I need to keep casing the joint.
Posted by Steve Reed at 7:42 AM

It IS quaint... and the blue is killer, and Olga's reflection floating in the window? Nice.

Love the blue! But Olga in the window is the best :)

I enjoy the beauty you find in buildings and general sprawl. I'm the same but Adam doesn't share that view - he just sees it as wood and brick *sigh*.

I saw Olga right away but I didn't see you until I looked at the pic really hard. :)

Are you sure this is a Japanese restaurant and not a Chinese one? This kitten I remember as a symbol from Chinatown?