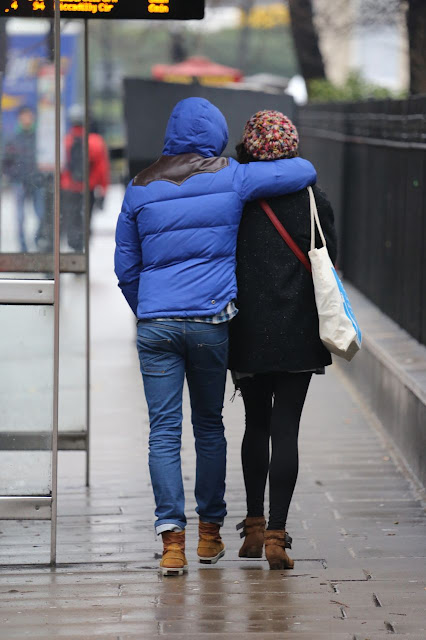 Well, the water seems to have finally stopped flowing from our broken main. There's still a hole in the street, but at least they've managed to dam up the Portobello river. We haven't received any notices about boiling our water, as is de rigueur in the U.S. when there's a water main break. I'm still not 100 percent sure this was a water main, though. I suppose it could have been a storm sewer. Who knows.

Olga has developed a worrisome tendency to bite through electrical cords. She's done it twice -- once with a cable that connected my computer to our television, and once with the power cord for the computer. (Maybe she's trying to tell me to get off the computer!) We're finding ways to stash the cords in inaccessible places, rather than running them across the living room rug where they get tangled up with her blanket and her Kong toy.

Meanwhile, yesterday, I had to journey to the Apple Store for some replacement cables. First I walked to the mall in Shepherd's Bush, which isn't far from our flat. But of course the Apple Store there didn't have the cables I needed. So I hopped on the tube and went to Covent Garden, where I found what was required at an insane price. This dog is proving to be expensive.

Finally, and completely unrelated to anything else: Does anyone remember Mr. Swiss restaurants? They were fast food joints housed in A-Frame buildings, specializing in ice cream and burgers. There used to be one near my hometown in Florida, and when I was a kid my family would occasionally stop there for ice cream. As I recall it vanished sometime in the late 1970s. Well, I was recently added to a Facebook group about my hometown, and someone posted a photo of a Mr. Swiss menu which I later learned was taken from Flickr. (Hamburgers for 30 cents!) That led me to do some research on the company -- I never realized it was a national outfit. I thought we had the only Mr. Swiss in the land. But no! If you're interested, this account of the company history is pretty fascinating.

(Photo: A couple yesterday in Shepherd's Bush, spotted on my fruitless mall outing.)
Posted by Steve Reed at 7:00 AM

Oh Olga!
No. I do not remember Mr. Swiss. But you got me thinking about restaurant chains that came and went. Do you remember Lum's Hotdogs?

good morning! I remember Mr. Swiss! The A frame reference was what jogged my memory.

No Mr. Swiss in my town. but back in the 70s there was an A frame fast food...der Weinersnitchel. they sold hot dogs.

Ms Moon: Yes! I do remember Lum's. I'm not sure I ever went there, but I remember there was one in Tampa on Florida Avenue, just north of Busch Boulevard and Floriland Mall.

Angella: They were very distinctive-looking!

Ellen: I bet der Weinerschnitzel was a ripoff of Mr. Swiss. Or maybe vice-versa.

No Mr. Swiss in my neck of the woods. We had Burger Chef - and Circus Hall of Cream (it was in an old circus train car!).

I've never heard of Mr. Swiss but I do vaguely remember Lum's from FL.

I am more familiar with the cost of having a dog(s). Chewing through electrical cords is not a good thing, Olga! Bad Dog! Thankfully no dogs we've had has had that particular fetish. Others, yes, but not that one.

I'm not familiar with Mr. Swiss, but I can't wait to tell my Swiss husband about it!