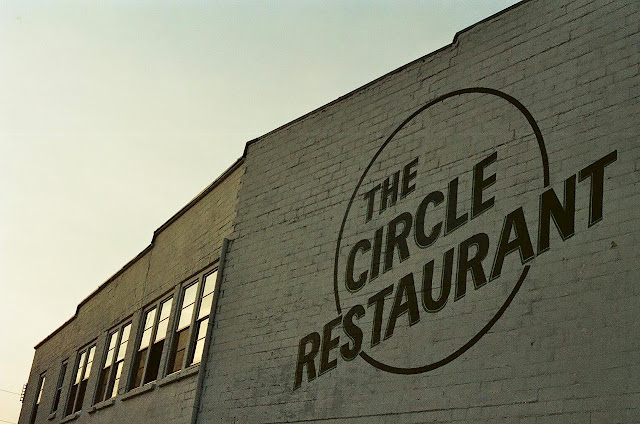 A few more old photos, scanned from my negatives. These are from Avon Park and Sebring, two adjacent towns in the center of Florida surrounded by miles and miles of citrus groves, pastures and emptiness.

My grandmother grew up in Avon Park, and my great-grandparents lived there and in Sebring most of their adult lives. As a result I visited Avon Park many times as a kid and young adult. In fact, my family owned property there -- including my great-grandparents' house -- for many years, until we finally sold it all about a decade ago.

While in college in the mid-1980s, I drove from Tampa to Sebring several times on photography outings with my friend Suzanne. On one of these trips, in early 1988, I took photos of the exterior of the Circle Restaurant in downtown Sebring, so named because it was on a circular street in the heart of town.

The restaurant is long gone, but the building is still standing, at least according to Google StreetView images taken in June 2011. I don't think we ate there back in 1988 -- as I recall we were there in the late afternoon, which looks about right judging by the light in the photo above, and it was strictly a breakfast-and-lunch place. I have a really terrible, underexposed photo of the front window with a sign advertising two eggs, grits and toast for $1.50!

(Incidentally, while browsing Sebring on StreetView, I also came across an amusing image of three guys outside the firehouse giving a thumbs-up to the Google truck. Ha!) 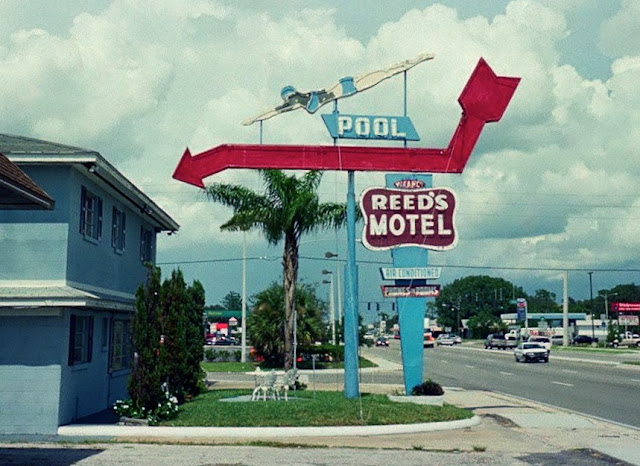 Avon Park is just north of Sebring, and I took this photo there about ten years ago. I have long loved this sign, not only because the motel carries my family name (purely coincidence -- my relatives in Avon Park were all on my mom's side and hence none of them were Reeds) but because it was just so awesome. It has since been replaced, but the new sign is similar. Clearly the owners wanted to preserve that '50s charm.
Posted by Steve Reed at 6:33 AM

I knew a woman from Avon Park. We probably do know people in common.
I love those old motels. I'm glad the new owners of Reed's kept the charm.

Preserving the 50's indeed. Good for them!

Old signs were so cool. I remember several in Houston that are long gone now, like the construction worker on the I-beam outlined in neon and his arm moved up, gesturing to the crane operator to raise 'er up!

The "REED" sign is the absolute BEST! So glad you photographed it when it was still the original one. Makes me think to go around town and capture the oldies before "a better idea" replaces it.
Good job, you!

Love the Google street photo at the fire house...what a hoot!

Love that old sign. So glad they kept the feel of it. Looks like the motel is for sale. Hope the new owners don't chuck the sign.

I love what looks like an impending t-storm in the background. Good old Florida and its thunderheads!

I love those old motel signs, too. You know, there are a lot of similarities between Los Angeles and Florida -- especially in the San Fernando Valley where much is the same as it was forty or more years ago.

Ms M: We probably do! Avon Park is not THAT big of a town.

Ellen: Many of them really were artworks.

LindaSue: Definitely photograph them while you have a chance!

Helene: Isn't that hilarious? I laughed out loud when I saw it. (Hint for other viewers: hit the + sign in StreetView to zoom in on the firefighters. Funny!)

Lynne: Yeah, I shudder to think what the future of that motel might be. I'm amazed it's lasted this long. And yes, a rainstorm was blowing up when I took the photo. I remember driving in it!

Elizabeth: I guess parts of LA and parts of Florida were all developed at the same time, with mid-century, car-culture design aesthetic. I love Southern California and all that '50s stuff like the old coffee shops and motels.