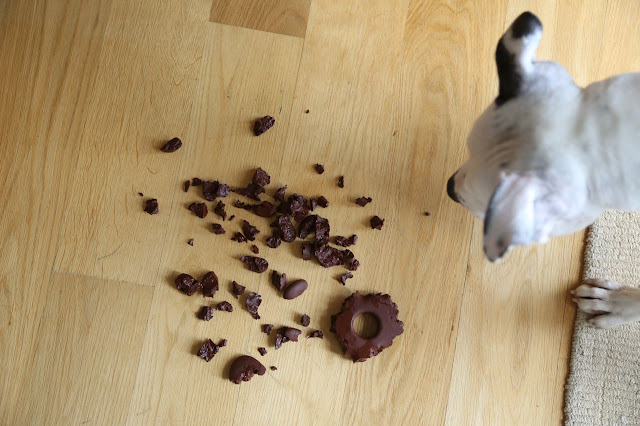 The other day, while walking Olga through the neighborhood, I passed a chi-chi little pet boutique called Mungo & Maud. Billed as "dog & cat outfitters," the store specializes in products that are "minimalist yet tactile with a strong use of natural materials." I filed it away in the back of my mind -- a possible shopping destination for dog stuff.

Yesterday, I needed a chew toy for Olga. We bought her a Kong ball when we first got her, and her relentless chewing had worn it down to a soggy, ragged mass of solid rubber. She destroys ordinary tennis balls in a matter of minutes. So I knew it had to be something tough. 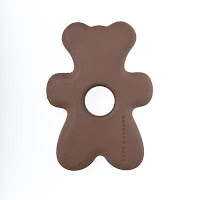 The two of us popped in to Mungo & Maud and asked what was available. The sales clerk showed us an assortment of toys, most of which were very soft rubber -- toys that Olga would have trashed in no time.

But they did have a hard rubber bear -- the one at left, in a photo from the Mungo & Maud web site. It seemed likely to resist Olga's choppers at least for a little while, so I bought it, at the absurd price of £18.50. (As I said, it's a chi-chi boutique.)

Well, I gave it to Olga when we got home, and I took the top photo about half an hour later. Soon afterward, when the crumbs were even smaller, I threw it all away. (I watched her during the demolition process, and while she was very careful not to ingest the pieces, I thought it was getting risky.) The brown bear did not pose as much resistance as I had hoped. Maybe it's meant to be more of a tuggy toy than a chew toy -- hence that open ring in the middle?

Olga loved it. She loved it to death.

I don't fault the product. It's just that Mungo & Maud is made for cute and noble Notting Hill dogs of pedigree, dogs that would appreciate minimalist design aesthetics and natural materials. Olga is an East London bruiser. Design is not her strong suit.
Posted by Steve Reed at 6:30 AM