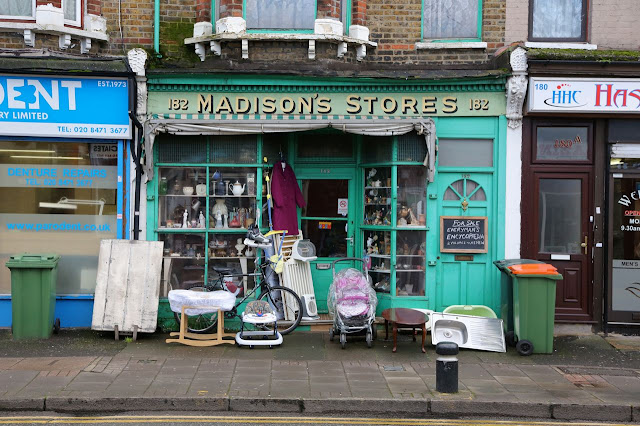 I finally got the heck out of the house yesterday for a long photo walk. I've been hesitant to go and leave Olga alone, but I have to do it sometime, and she's been fine the few times we've left her before. Besides, I was starting to feel a little trapped. An escape was in order.

So yesterday I took the tube to Leytonstone, in far east London, and walked from there south through Upton Park to East Ham. (Yes, there's a West Ham, too.) After ruthless editing, I came away with about 19 good shots. I tell you, nothing restores my soul more than getting out and walking around and taking pictures. Nothing.

It wasn't even particularly good weather. At one point it started raining, but I just popped into a little mom-and-pop cafe and had a viciously hot, milky coffee (for 80 pence, less than a Starbucks!) and by the time I was done the rain had stopped.

When I got back home again I talked to my mom on Skype -- she's stuck in income tax hell, preparing taxes for clients of a large national accounting firm that shall remain nameless -- and in between did some work and walked the dog. A good day.

I'm sure you've heard the news about the British House of Commons passing a gay marriage law. There's been some controversy about it, but far less than one would expect in the United States if such a law were proposed. It's refreshing to live in a place where these discussions are handled with such civility. Nobody has been marching in the streets with signs bearing ugly slurs or admonitions about sin -- at least, not that I've seen.

Personally, I'm not a huge advocate for marriage -- I'm happy with civil unions, as long as I have the same rights as a married couple. It's the equality I want, not the "married" label. (Some argue that you need the label for true equality, but I don't buy it.)

The U.K. already has civil unions, and Dave and I are already recognized as a couple in England by virtue of our civil union in New Jersey. That's why I was allowed to immigrate to the U.K. at the same time that Dave moved here for work. So at least in our case, the question appears settled, and hopefully no further action is required!

(Photo: Yesterday near East Ham.)
Posted by Steve Reed at 6:07 AM

I am very heartened by the news of gay marriage in the U.K. No, not everyone wants to be married but by god, if they do, they should be able to! Fundamental rights belong to all. That's my opinion.

I agree with Ms. Moon. A person's sexuality should have NOTHING to do with his or her rights under the law. And if they want to be married then they should be able to!

This time of the year makes me VERY glad that I'm not using my accounting degree :)

Nice to know that there is another enlightened country we can aspire to because this one is stuck in the dark ages intellectually.

The advantage of marriage is just legal BS- like being with your loved one in hospital and making decisions re: treatment of said loved one. Taxes filed jointly is sometimes a good idea- but Marriage in itself has never made much sense. Back in the day - used to join wealth with wealth, woman considered as property. Old news, just saying that some still consider that as true, a sort of ownership. Nothing like marriage to kill passion and romance and spontaneity ...ba humbug! Am envious of your walk and photo fun- Loved the Japanese store front yesterday- forgot to comment!

Your comment about getting out and taking pictures being good for the soul rang so true to me. I am out taking photos every chance I get and crave it if I haven't been out for a few days. In fact, I had exactly one hour to spare yesterday afternoon before meeting some friends and I manged a short walk in Scottsdale where I snapped some shots. I'm sure those will be brutally edited too but it was so renewing just to take them.

Agreed on all counts, Steve!

And there is nothing like getting out with the camera and walking around taking photos to restore the soul. Exactly the way I feel.

P.S. I know you probably blogged about when you and Dave had your civil union, but can you send me a link to that post?

Agree...excellent post! And my camera keeps me sane. When I need to clear my head, I grab my camera. I just wish I had more time to photograph. I envy your great day!