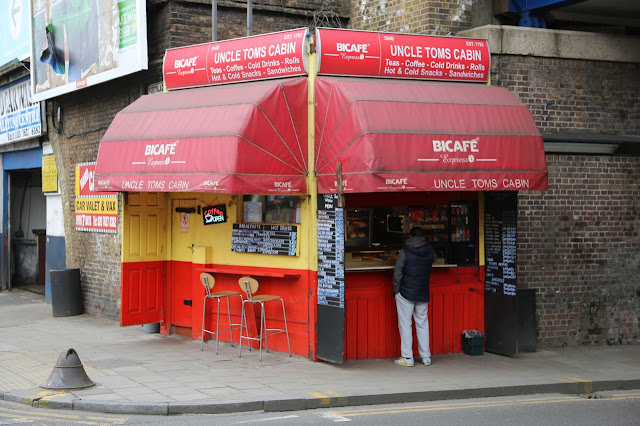 Dave shook me awake in the dark wee hours this morning. He was sitting up in bed, merely a silhouette.

"We've had a little explosion," he said, unfurling his right hand for emphasis like a Roman candle.

I was instantly awake. When it's 1:30 in the morning and someone says "explosion," you pay attention.

"Do you remember her noodles?" Dave said, gesturing at the dog, who was lying between us -- also wide awake now and wagging her tail in happy expectation of going outside for a walk.

I said "Yeah..." even though I didn't. Noodles? Did we buy noodles for the dog? And then I thought, maybe he's trying to tell me the dog exploded. Maybe she'd been sick, or made a mess in the house.

"I don't understand," I said. "Did she get hold of the package?"

I looked at him, increasingly certain that this entire conversation was not reality-based. "Are they on the floor?"

I, however, was awake and laughing helplessly, as quietly as I could. Noodle explosion?

(Photo: Uncle Tom's Cabin on Wandsworth Road, near Vauxhall.)
Posted by Steve Reed at 6:32 AM

I hope Dave doesn't read your blog. But if he does, we're laughing with him and not at him.

Something tells me Dave is never going to live this one down.

Poor Dave! I've had dreams that real before too! I used to sleepwalk once in a while and thank goodness I don't do that anymore.

that is hilarious! I laugh because I've had similar conversations in the night with my husband.

Elizabeth: Oh, I told him I was blogging it. We ARE laughing with him, because when I told him about it this morning he got a good laugh too. (He remembered none of it.)

Lorianne: I wonder if they have the slightest idea what Uncle Tom's Cabin was about?!

Lynne: I would love to know what the heck he was dreaming.

Ellen: I'm sure I've prompted similar conversations in my time! Once when I was a little kid I was sleepwalking, and when my mom asked me where I was going, I said, "I knew when I started but I got detained." That has become a classic line in our household. Ah, families.

That little red shop is the complete hilarious dubiously dubious package! What a great find. Sleep talking is also hilarious unless it is scary...my son talked in his sleep and if especially disturbed would also walk. One night he tumbled into my room and demanded to know where the ball was- you know! The ball with the guts in it!!! And the postie tokes!!!He was in another dimension and weirdly did not focus his eyes on REAL objects- looked through me to something behind...EEEK my child is possessed! I do hope that you get those noodles cleaned up after the dog exploded...Dave must be having a bit of stress in his waking life.

That's hilarious! I'd love to know what the dream was about too. Mike mutters in his sleep but it's never distinct enough for me to decipher.

What I want to know is what's a Bicafe? And is there a straight one too? Or one for those of us who don't care one way or the other?

In the words of Abraham Lincoln, "It is true that you got detained. Now he has gotten detained. You are all detained alike."