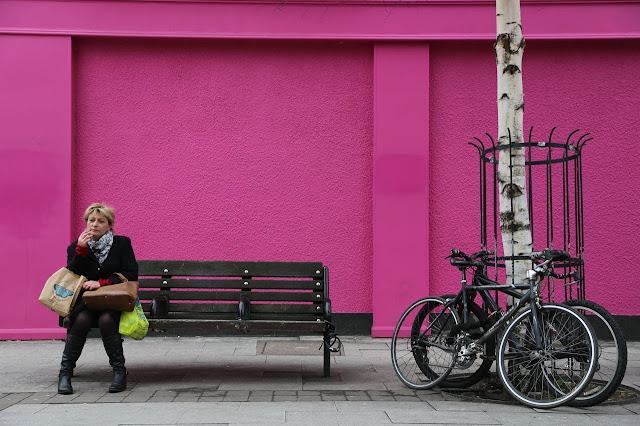 I keep finding bags and boxes of books outside the charity shop next door. I take Olga out for her morning walk and they're sitting on the sidewalk, completely unprotected from the elements and from pilfering passersby. One morning I brought a box home because it was beginning to rain and I didn't want them to get destroyed; I brought another bag home this morning because it's Sunday and the shop doesn't even open until tomorrow.

Will I pilfer them? Absolutely. It's my fee. But if this bag is anything like that previous box, there won't be anything worth keeping. Self-help and John Grisham -- there are a lot of questionable books out there.

Dave and I had Chris and Linda, our neighbors, over for drinks yesterday evening. I'd anticipated an hour or two, a few cocktails. Well, we wound up talking for four hours, working our way through a round of tonics and three bottles of wine. Thank goodness we had some yummy cheese puffs that Dave made with pate a choux, as well as some cheese and crackers and olives -- because that became dinner.

Chris is a funny character. No matter what the topic of conversation, he winds up talking about World War II. I guess the English, particularly Englishmen of a certain age (Chris is 70), are understandably fascinated by that period, as England was so frequently a direct target of Axis bombs and then endured years of post-war rationing. Chris said he holds his parents' generation in great regard for their sacrifice -- it's that "greatest generation" mentality we hear about in the USA. I pointed out -- cynically, perhaps -- that World War II would have been filled with its own ambiguities and atrocities if it were as saturated with media coverage as today's conflicts. We always think of World War II as a righteous war with clearly drawn lines of good and evil, but goodness knows both sides killed their share of innocent civilians. War is never clean, and rarely righteous, though I agree war against Hitler made more sense than any conflict since.

Yesterday seemed a bit spring-like. The temperature was moderate, and people were out in the cafes and enjoying the sunny afternoon. One of our amaryllis bulbs is sending up a new bud, though the other three are still dormant.

(Photo: Near Clapham Junction, last week.)
Posted by Steve Reed at 6:55 AM

War is never exactly clearly cut, is it?
In Keith Richards' autobiography, he, too, discusses the war and how it impacted his generation. Far more than we would think.

Oh goodness, don't get any old Brits started on the war. I'd know - I worked in a nursing home. If I only I had a pound for every time I heard 'oh I haven't had sugar in my tea since before the war'!

love all the brightly painted buildings in London. and I've had cheese and crackers for dinner too on occasion. not usually because of fun company though.

Oh, I love that pink wall! I love to read your rambling thoughts --

That picture is fabulous - and I love how she coordinated with mostly black clothing - that that splash of a green bag.

As a history widow, I have spent my share of time in WWII (just because that's what's often on the history channel). There are very few programs that talk about those ambiguities.

That must have been a super evening. Love when an event you think is going to be mediocre ends up be stellar! Great composition in this shot...not to mention the fab color!

what an intense pink! and that's an interesting thought about how wolrd war !! would stand up to the intense media coverage we have today. i get glimpses sometimes that what obtains in congress at the moment was ever thus, except it's now taken on an apocalyptic tone as networks try to sell themselves. i have tuned out as much as I can. At least for a while.

Time to worry is when you see your own stuff in thise bags.