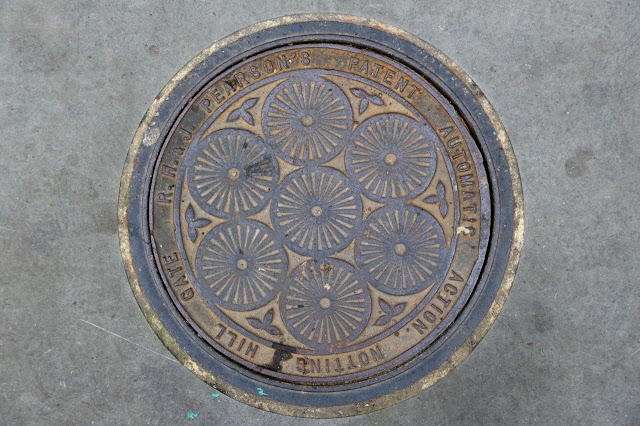 Ever since we moved to Notting Hill I've been noticing what look like small manholes in the sidewalks, adorned by an array of unusual covers.

The holes, about the size of a dinner plate, are called "coal holes," and were made to provide a clean method of delivering coal into the basements of Victorian and Edwardian houses. Coal cart drivers could pull up on the street and load the coal directly into the hole, rather than traipsing it through the house leaving dust and smudgy footprints.

A pretty ingenious way to make something as filthy as coal a bit cleaner! 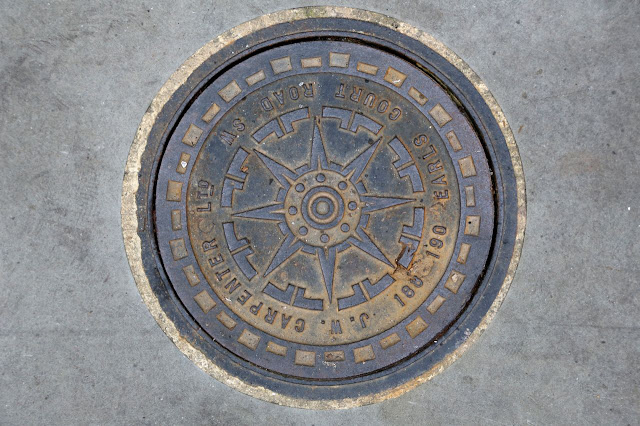 I don't know whether these holes are used for anything now. But they're all over the place, and I can't help but admire the decorative covers, which are objects of fascination for certain devoted fans. 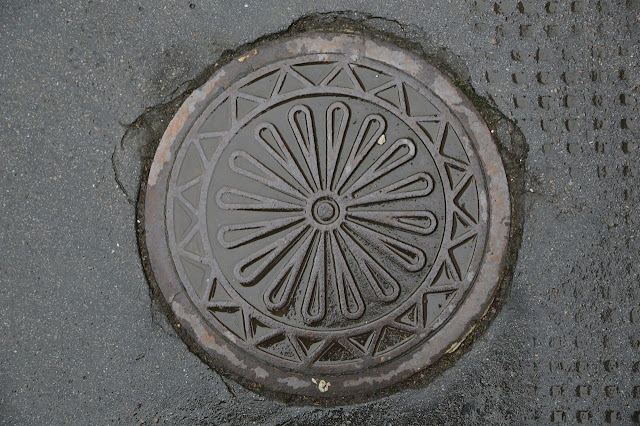 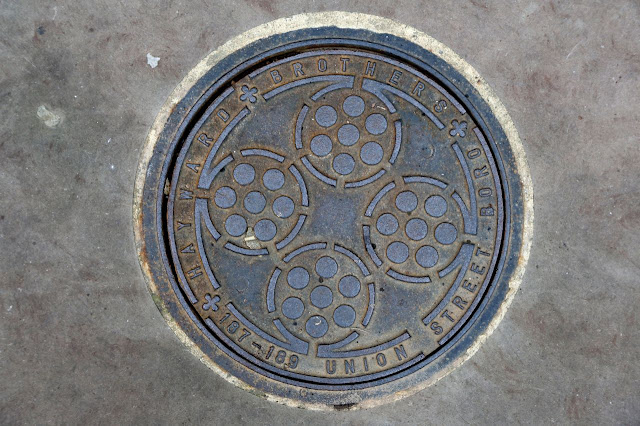 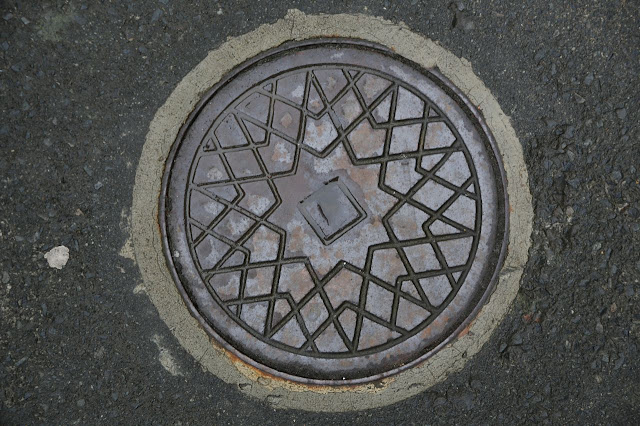 I've noticed two in particular that are very unusual. 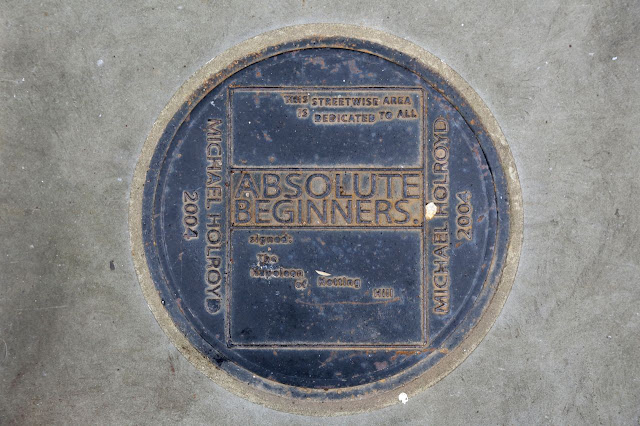 It turns out there was a public art project not too long ago to install decorative coal hole covers in parts of Notting Hill, carrying poems by well-known writers. This one is by Michael Holroyd:

This streetwise area
is dedicated to all
ABSOLUTE
BEGINNERS.
Signed:
The
Napoleon
of Notting Hill 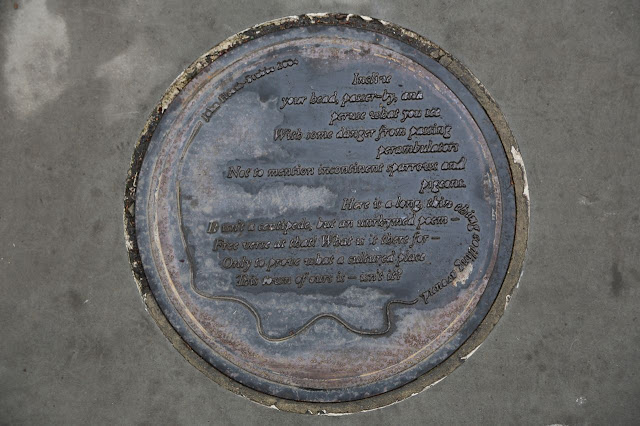 And here's one by John Heath-Stubbs:


Incline
your head, passer-by, and
peruse what you see
With some danger from passing
perambulators
Not to mention incontinent sparrows and
pigeons.
Here is a long, thin thing coiling around -----
It isn't a centipede, but an unrhymed poem -
Free verse at that! What is it there for -
Only to prove what a cultured place
This town of ours is -- isn't it?

Apparently there are a few other poetic coal holes in the neighborhood. Now that I've seen the web site for the public art project and the accompanying map, I know where they are. I will report back with a second post! (I know you can't wait.)
Posted by Steve Reed at 6:37 AM

Love these! How interesting: both utilitarian and beautiful at the same time. And how easy on the coal delivery drivers! It would be fun to know if they serve any purpose now. Love the poems, especially the long one where for certain if you stopped to read the entire thing you might be trampled. ;)

Omg, these are gorgeous! I love how attentive you are to your world, and how you share it with us. I too wondered if these holes have any utilitarian purpose now. And that phrase, ABSOLUTE BEGINNERS, it strikes me so powerfully this morning, in a good way. I wonder what subconscious idea it evokes?

always happy to be here, friend.

Aw- these are wonderful! Wouldn't it be fantastic if more of our every-day items were so artistically pleasing?

Your commentary today jogged loose a long ago memory of the coal truck delivering coal to our house when I was just a little kid. It went down a shoot through a basement window right into the coal bin in the basement. I can still see my dad shoveling coal into that furnace on a cold winter day. The other thing that popped into my head from your post is that "Absolute Beginners" is an old David Bowie movie from somewhere in the 80's.
I'll have to look for these the next time I get to visit London.

Yup, can't wait! I totally disregarded those dinner plates in the walkway and before entry ways- just thought they were decorative...Thank you!
When I lived there we did use coal, and it was messy- it held the fire but did not produce heat- for that we used old broken wood chairs...
Agree with Ms. Moon! Artistically pleasing every day items. porta potties come to mind which seem to be everywhere- they could be made to look more interesting!

Lynne: Aren't they great? They're my new fascination! I would love to know what they're used for now, if anything. It seems weird that people would preserve them through house and sidewalk renovations if they serve no purpose.

Angella: Yeah, I liked ABSOLUTE BEGINNERS too. It reminds me of "not-knowing" in Zen, the freedom that comes from "no mind."

Ms Moon: It would! And actually, I think design has been on the upswing for several decades now. A lot of our everyday products are quite well designed, though not as ornately as these Victorian metal slabs.

Sharon: How cool you remember that! My grandparents had a window in their basement where coal used to be delivered, but that had stopped by the time I was born. I've never heard of that Bowie movie!

A good read thanks Steve.

In 1950s Lancashire we had gratings at pavement level above our coal cellars. A popular scam was to knock on a door, crying about losing half-a-crown down through the grid, wailing about how it was dad's beer money and so a beatng would ensue if not returned. A fruitless search would reveal no coin in the basement coal hole. Gullible householders would lend the young con artist the money to stop the commotion!