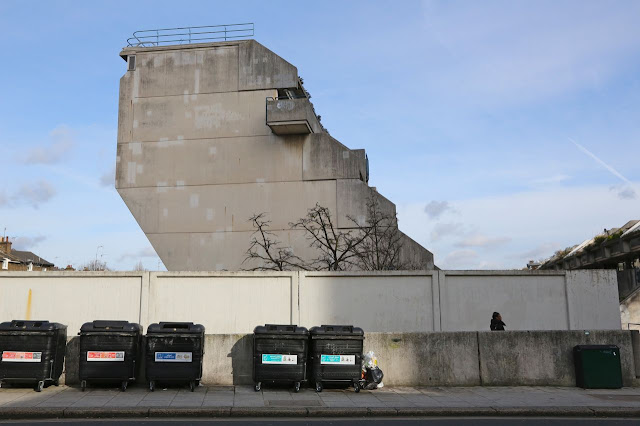 Yesterday morning, when I took the dog for a walk at about 5 a.m., I was surprised to find a river of water flowing down Portobello Road -- well, maybe not a river, but at least a small creek. It was enough to make one of the shopkeepers put plastic bags over his shoes as he set up his outdoor displays. It was bubbling up from the sidewalk and from cracks in the street just outside the driveway to our apartments, and it had no odor, which made me think it was coming from a broken water main rather than storm sewer. (Though we have had rain the past few days.)

The problem had obviously already been discovered, because there was caution tape strung all around the unstable parts of the sidewalk.

I went about my business and didn't go out again until late morning, when I was surprised to find the water still flowing. More caution tape had been erected, but by now the water had undermined the sidewalk into our apartment complex, leaving a topsy-turvey collection of concrete slabs, and had formed a huge puddle of sediment in the sunken playground area.

I asked one of our neighbors why the water company, Thames Water, didn't have a work crew on hand. She shrugged. "It's Sunday," she said, like it was the most normal thing in the world to let a water main break just linger all day.

And linger it did. The water flowed and flowed, all afternoon and into the evening. Occasionally more caution tape appeared. Our water pressure dropped precipitously. Finally, after dark last night, I heard some guys with heavy equipment busting up the street, and I went out briefly to watch as they began working.

This morning, though, the equipment is gone, there's a small pond in the street surrounded by traffic barriers and the water is still flowing, flowing, flowing. It might be flowing slightly less than it was. But there's still a lot of repair to be done. And then someone's got to rebuild our sidewalk and clean out the playground. What a mess!

I am bemused by the utter lack of urgency with which the problem was addressed. I can't help but wonder why a work crew wasn't on the scene within hours of the break. Flowing water is an incredibly destructive force, as anyone who's ever seen the Grand Canyon knows!

(Photo: Completely unrelated, a photo of the side of the terraced Alexandria Road housing estate near St. John's Wood.)
Posted by Steve Reed at 6:46 AM

Good grief! All that water going to waste! I hope they fix it soon.

Eye-catching shot! Those are flats? I had to read the caption to see just what I was looking at! Love it.

Even in Lloyd, they get someone on it if there's a water leak somewhere in the pipes.
Lloyd.

interesting building. it's not unusual to see broken water pipes going unmended for days in Houston.

WATER -flooding yikes! Having had this house flooded four times I can tell you that the very sight of a slight puddle near the house throws us into a frantic lift and shuffle of everything on ground level. "Sunday" I didn't realize that anyone still took Sunday off, especially since all emergencies can not be scheduled for week days...What a mess!
That building looks all wrong considering that there is gravity on this planet. Weird!

That's insane! And that building is unique..to say the least!