The Good Fairy, and Balcony Cleanup 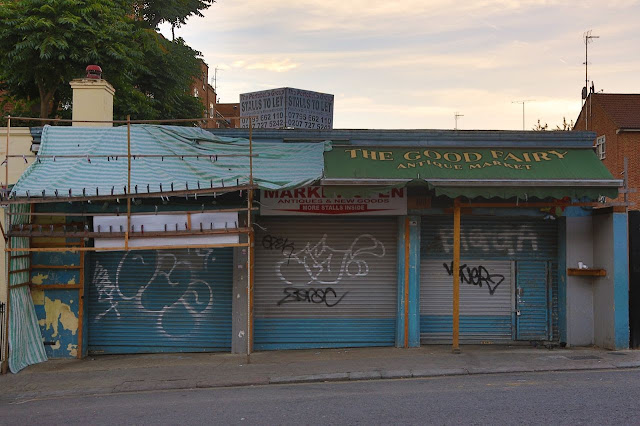 This rather sad-looking shopfront is adjacent to our apartments on Portobello Road. It's apparently going to be torn down to make way for a couple of swanky townhouses -- that project is somewhere in the municipal approval process. I worry how it will affect the tree at left, which is in the courtyard of the Earl of Lonsdale pub next door. The developers are supposedly going to dig a deep basement for the new houses, and I'm sure that tree's roots would be affected.

(Of course the construction will probably also make our lives miserable, at least for a while.)

The gray wall on the far right, down at the bottom, is the home of our street-art fox.

We had a busy day yesterday! Several weeks ago Dave bought a couple of new plants, a clematis and a butterfly bush, and I've been bugging him to repot them in more suitable, long-term containers where they have room to grow. Well, Dave stepped out on the balcony yesterday and proclaimed it a mess -- which it kind of was, partly because of my policy of letting weeds grow and generally allowing nature to take its course. Concurrent with repotting the new plants we cleaned up the balcony.

We finally got rid of the boxwoods that Dave hates so much. (He's wanted to throw them out ever since we arrived here.) I feel a little bad about this, because they technically belong to our landlords, but they are past their prime. We set them downstairs next to the front door of the building, where they look pretty good and have more room.

We also threw out our lavender, which had grown woody and gnarled and was partly dead, and we pruned and moved around the other plants. It looks much different out there now, and granted, there is a heck of a lot more space.

Last night we met up with a friend and went to see "Elysium," the sci-fi film about a polluted, overpopulated Earth and an orbiting space station created by rich people to elevate them (literally) above it all. Kind of an interesting movie, and very pertinent so soon after the Occupy movements and all those questions about the One Percent. It has its flaws, though -- the characters are thinly drawn and skew toward stereotype (the rich people speak French; the poor people, Spanish). All in all, a qualified thumbs-up.
Posted by Steve Reed at 7:15 AM