Autumn on the Doorstep It has been cold the last few mornings, with temperatures hovering right around 50º F. Make way for autumn! The garden is still blooming -- the purple loosestrife, the scabious, the verbena, some yellow daisyish things -- but many other flowers are past their prime. I cut down the last of the red-hot pokers last night, its formerly brilliant orange head a shriveled mass of brown.

The blackberries have reached that stage where they're looking sloppy and seedy, and any remaining fruit will probably never adequately ripen. I ate a few while walking Olga over the weekend, but they weren't as good as they were a few weeks ago. 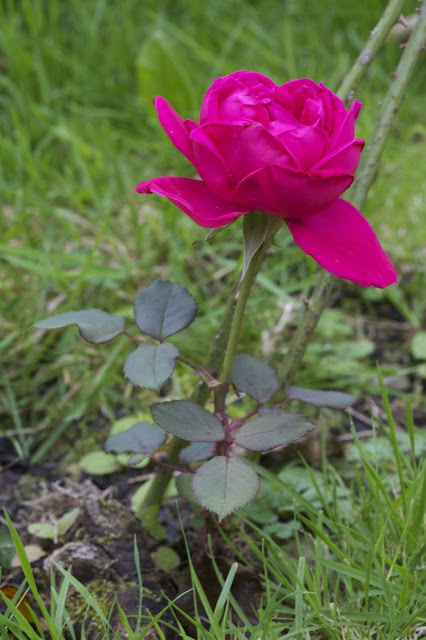 One flower we do have at the moment is this rose. It's from a plant that, when we moved here, was cut all the way to the ground. The woody root began to sprout, and we encouraged it to grow. This is the result! We've never seen it flower before. (It had a bud last year but, because it's so low to the ground, Olga knocked it off before it could open.) We have another rose that, similarly, has been cut down entirely but each year sends up a tiny shoot. Maybe we'll get a flower out of it sometime, too.

On Monday I worked on transcribing my old journals. You may remember I'm trying to sift through all that writing, salvage the readable parts and edit out the embarrassing, lovelorn moaning and dramatics to which 20-year-olds are prone. I'd ideally like to make them into another blog, even just a private one for the purpose of storing that writing, and then destroy the paper journals. What struck me as I worked was how profoundly unhappy I was in my early 20s. I don't remember those years that way at all -- I remember them as a lot of fun -- but my writing indicates a high level of professional and personal frustration. Of course, the journal probably reflects those feelings to a disproportionately high degree, since it was my outlet, my steam valve. I'm keeping enough to show I felt that way, because I don't want to whitewash the past -- but I'm eliminating the repetitive and over-dramatic rumination.

There's a lot of fun stuff in the journals too -- my trip to San Francisco in 1991, my preparations to join the Peace Corps.

On a somewhat related note, I read an interesting article in the Times about how, on a national level, we're in a "purging" phase of history. We're reframing our past to include more diverse viewpoints, reconsidering the legacies of people like Andrew Jackson and Thomas Jefferson. We're thinking about the appropriate place for Confederate symbols. I'm against purging history entirely -- we're not the Soviet Union, after all -- but it makes sense that we would rethink and re-evaluate as society evolves. That's part of being a living culture.

(Top photo: A van Olga and I pass daily on our morning walks. It never seems to move. Maybe it's just not soccer season right now?)
Posted by Steve Reed at 6:46 AM

I think all twenty-somethings go through periods of angst, wondering about their futures and whether they are up to the demands of full adult life and what that life will be for them. Additionally, because they have limited life experience, they may not realize that something that they feel has an overarching importance will, over time, not mean much, and other things will become significant. I do not remember you being outwardly morose at that time, but you did voice some concerns, which is normal.

I could use some 50 degree weather right now, and your rose is beautiful.

No. I would not be twenty again. My twenties were so very, very difficult although the births of two of my children were something I would not trade for anything.

My journals are the same, highly embarrassing and whiny. I do remember being very lonely sometimes in my 20s, but I think that is just my own particular brain, and my journals show I was completely depressed and self-loathing sometimes. You know what, I'm still the same person, still the same basic emotional range. Sigh. I hardly ever wrote about the happy times, and there were at least as many. But when we're happy, we're out there living it; we have no need for outlets. Journals can be a very one sided view of personal history. I keep wondering what to do with mine. Trash them and all the embarrassing details inside them, or leave them to be found when I'm gone. Maybe I'll do what you're doing someday.