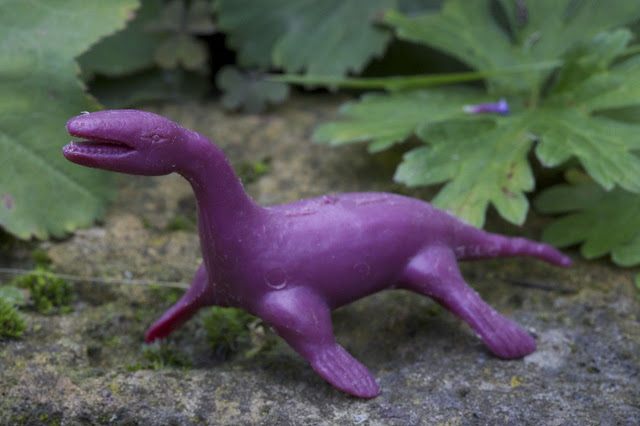 Dave and I watched a documentary the other day about the Loch Ness Monster.

For a short time I thought I'd been swept back to the 1970s, the era of "In Search Of..." and "Chariots of the Gods." Wasn't Nessie debunked years ago, after all? I remember someone coming clean with the revelation that the most famous Nessie photo was faked. I thought we'd all given up on any possibility that she still swims in the Loch's murky depths.

As it turns out, that was basically the gist of the documentary. It explained away the many reported sightings over the years, using a variety of scientific devices and experiments. Aside from the famous faked photo, others had been mysteriously altered or depict natural phenomena such as waves. The most interesting explanation, I thought, involved seals -- apparently Loch Ness is open to the ocean and as a result, it's not unheard of for seals to enter its waters. The descriptions many witnesses offered sound like seals -- elephant-gray creatures with a hump emerging from the depths.

I used to love shows like "In Search Of..." in which Leonard Nimoy narrated explorations of all sorts of mysterious phenomena, from the disappearance of Amelia Earhart to the geoglyphs of the Nazca Plain. (And by the way, the old shows are available on a dedicated YouTube channel.) But even back then, I remember doubting that the Loch Ness Monster really existed. It was just a fun story, sort of like a ghost story -- something to tingle your spine and make you wonder what else humanity didn't know.

As it turns out, that's the most likely explanation for the durability of the Nessie myth. People like the drama, and part of us wants it to be true. Psychologically, we leave ourselves open to the possibility, and therefore seize on any shred of evidence to bolster the case.

No doubt it's also generated a lot of tourism for central Scotland.

That purple critter above is my own personal Nessie, which I've had since I was a small boy. In 1973 or so, my brother and I went to the Maryland home of one of my mom's college friends, and played with some small plastic dinosaurs belonging (I believe) to her sons. (I'm not sure where the sons were, but I don't think they were there at the time.) Mom's friend gave us a few of them, and I've held on to this plesiosaurus ever since. My brother and I named it, rather unimaginatively, "Plesie."

Plesie now lives on my windowsill. If I ever get to the real Loch Ness, maybe I'll take Plesie with me and fake my own photograph! (It won't be easy, since Plesie is only about two inches long.)

By the way, on Google Street View, you can take a virtual boat tour of Loch Ness. No monsters were visible that I could see.
Posted by Steve Reed at 6:27 AM

I'm happy to go with the seal theory - now I know Loch Ness is close to the sea.

Being married to a Scot, I know that the Scots take the possibility of there being a plesiosaur or something in there very seriously. I quite like the romance of that.

Intellectually, I submit, and agree there probably is no such thing.
But in my heart, I still want to think there's a Nessie in there! :o)

(Your portrait is stunning, hanging there on the wall in the previous post!)

Ah- how I loved the idea of Nessie as a child! I think all of us when we are children simply want to believe in the unbelievable. I see this in Owen now.
And sometimes I watch "Ancient Aliens" because I still have some of that in me.
I love that you've kept Plessie for all these years. That just delights me.

they are still finding new creatures but I doubt they will ever find Nessie.

The stories of shy creatures, Nessie, Bigfoot, gnomes and trolls, intrigue I think because there is always a hope that an entity exists , smart enough to stay hidden, and with any luck and gentleness of spirit may, one day, appear to only the most special of us, like a wink from the universe, and then it is gone again. I think that is the fantasy of the lonely or misunderstood. BUT Nessie is real! She is purple and two inches long- and she appears on your sill. You are most special!