The Novel That Started It All 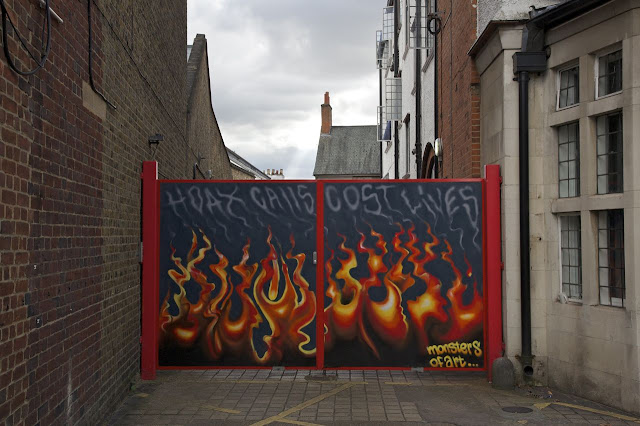 I finished "Bleeding London," the novel, yesterday. It was a curious book, and even more curious given my long involvement with the RPS photo project that took its name. It started as sort of a dark noir novel with three main characters: an ineffectual business owner, a gangsterish thug and nymphomaniac shop assistant.

These three shared a common involvement with maps and the streetscapes of London, with walking miles through the city and recording their lives -- by different standards of measure -- on maps.

One of the main characters, Stuart London, decides to walk all the city streets after essentially having been made redundant in his own business -- a walking tour company run largely, now, by his more capable wife. He sets out with an A-Z, the bible of London street maps, and marks the streets as he completes them.

Ironically, he specifically avoids photography during these walks:

"He considered taking a camera with him to photograph the things that caught his eye, to create a visual record and an aide-memoire, but he decided against it. He feared that the presence of a camera would turn his walking into a photographic expedition, into a quest for the picturesque. Besides, taking photographs would make him conspicuous, and there were all sorts of places where a man with a camera would be unwelcome."


At the end of the book, Stuart is left with a blackened A-Z and a diary that recounts his experiences as a walker. But his wife, upon discovering and reading the diary, decides he couldn't possibly have walked all those streets. She points out that if he'd walked his goal of 10 miles a day, five days a week, he would have covered eight and a half thousand miles and walked for three and a half years -- and he would have had a much, much bigger diary:

"Let me tell you what I think happened. I think that in the beginning you genuinely wanted to walk down every street in London. It sounds like you. I'm sure you intended to do it. I'm sure you planned to. But I suspect that before long it got very boring. It was all quite pleasant walking through Hampstead and Richmond and Kensington. And it was just fine walking through Highgate and Blackheath. Wandsworth and Stoke Newington had their problems. Lewisham and Leytonstone you probably didn't like at all. And you knew there was going to be worse still: Peckham and Tottenham and Canning Town and God knows where else. I'm sure you weren't a snob about it, probably you really did visit Brixton and Shoreditch and Wanstead. I'm sure you weren't too delicate to walk through a bit of urban blight. But I imagine that before long you looked at all those remaining mean streets that led you through depressing council estates, and through boring, boring suburbs, and perhaps even into some dangerous no-go areas, and you thought to yourself, I don't belong here. This isn't my manor. This isn't my London. And you said to yourself, "Forget it." And frankly I don't blame you. Nobody would."


Stuart protests, but in the end, I was left wondering whether he really did walk all those streets. Or was the wife correct, and was all that walking  -- not to mention the occasionally almost supernatural interaction between the main characters -- a product of Stuart's imagination? When I talked to Nicholson a couple of months ago, he said he was not his character. But I was left with a sneaking suspicion that he was indeed Stuart's alter-ego, writing an imaginary walking diary that became a novel.

As a map-lover, I appreciated the repeated references to maps, and what they represent. Map people are dreamers. In my case, an enthusiasm for maps isn't about the paper and the lines and the craftsmanship -- it's about the places. The wondering. What would that street, that city, that country look like? What kind of a place would have a name like Tooting, or High Worple, or Ismailia Road or Red Path? I could read maps for hours and just wonder about them, and that wondering is part of what fueled my participation in Bleeding London -- it gave me a desire to turn the next corner, and the next, and the next.

I'd say odds are good that Nicholson is a map-lover, too.

(Photo: A new, slightly creepy mural outside the West Hampstead Fire Station.)
Posted by Steve Reed at 6:11 AM

I had forgotten that your photographic project was based on a book -- or is it the other way around? You seem to always be reading interesting novels and things that are off the beaten track. Do you read reviews like London Review of Books or NY Review of Books?

How intriguing, the characters and the wife's response, which I found amusing. As for the last paragraph - my sentiments exactly. I can spend hours poring over maps, especially if I am about to visit some place; I am then led off on other directions I really had no intention of visiting.

I love maps too. I doubled majored in writing and cartography in college and was an actual map maker before I was a journalist (before everything was digitized and my very neat and even hand was a boon) and then for a while I worked as an editor for a company that published maps and atlases, before going back to magazines and books. I get the romance for sure.

I was listening to NPR briefly while in the car going from A to B and caught the middle of an interview about why people use their mobile devices in places like waiting in line (life on hold and it reconnects them to their life), etc. the person being interview says she purposely goes on road trips without any devices and with a paper map so that she is forced to converse with her companion, to be directly involved, and to look around. OK, so the point of this comment which seems to not have any connection with your post is the paper map.

It seems there a lot of map people out there. I'm one too. I have a collection of maps from all over the world. It's one of the first things I do when I plan a trip, buy a map and study it carefully. I never use GPS, I'd much rather use a paper map. For some reason, studying a map gives me a much better sense of direction even without the map at hand.

I can't read a map nor follow a GPS. My senses of direction and geography are completely lacking. When I travel, I try to use both and still get lost as shit.
I'm glad you finally read that book. It adds yet more dimensions to the project you have been so involved with. Which has been fascinating to me!

I might have mentioned this before, but I used to take our giant Reader's Digest atlas & open it to the index. I would close my eyes & poke my finger at a random spot & then go find it on the map. If I were doing that now I'd probably go see if there was a Google street view of it :)

So it seems like the Bleeding London project was to prove to the wife that at least SOMEONE walked every street!